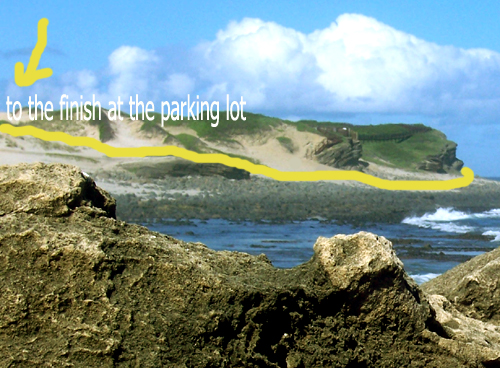 almost at the finish of the Nahoon Point parkrun

I cannot recall what made me suddenly decide to start doing some Nahoon Point parkrun runs. Perhaps it’s because my eldest son has now done 39 Sunrise on Sea parkrun runs, and because I used to run a lot in my younger years, and even though I’m unfit, running will always be in my blood.

When I mentioned my eagerness to do some Nahoon Point parkrun runs to Tony, he was just as eager to get started doing some too. Since my younger son spends most Friday nights with me, and only goes to his dad’s place on a Saturday morning after his dad and older brother have done the Sunrise on Sea parkrun, I also suggested to Tony that we take my younger son with to the Nahoon Point parkrun.

Register for the Nahoon Point parkrun

So the three of us registered on the register page of parkrun.co.za

After we registered we each got an email with a link to our personal parkrun profiles where we could get our parkrun barcodes. The parkrun barcodes are 6 on a page and we printed out those three pages from our home computer printer. We cut one parkrun barcode out from each page and popped each one into a little see-through plastic packet not much bigger than the parkrun barcode (about the size of a business card) that sealed nicely at the top.

We were good to go!

The Starting Point of the Nahoon Point parkrun

Upon arriving in the parking lot at the Nahoon Point parkrun we noticed many people on foot heading in a direction we didn’t expect them to be heading. We found out that the course in the Nahoon Point parkrun section of the parkrun website was the old course, and that the course was now a little different, with even a different starting point. All our spending time online working out different checkpoints had been for nothing. Oh well, we would just “go with the flow” and see where it took us!

I was surprised at how many people were at the start of the 136th Nahoon Point parkrun. Over 700 runners and walkers were eagerly waiting to start their 5km walk or run (or a bit of both!). It felt good to be there at the start, in the crowd of cheerful and healthy people, or people trying to improve their fitness or health. There was a good vibe.

Tony and I and my younger son had decided ahead of our first Nahoon Point parkrun that we’d stick together for our first one.

This 5km parkrun course usually attracts over 700 runners and walkers every Saturday morning. The run starts at 8am.

One parks one’s car roughly in the middle of where the run starts and ends, at the Nahoon beach overflow parking lot (up the hill from the opposite end of the stretch of the main Nahoon beach area to where Nahoon River mouth is – or you drive down past the Stirling badminton hall and James Pearce Park to get to this parking lot).

If you are early enough, consider parking at the Nahoon River mouth parking lot, and enjoy a walk across Nahoon beach to the opposite end to the starting point, just remembering you’ll have to walk back again (and a little further than before) after the run again, too.

The start and finish is on the beach. There’s about 1.3km of beach at the start, on Nahoon beach, and about 600m of Nahoon Point beach (a mixture of coastal path, sand and rock, with only uphill sand at the very end) at the end, taking one up to the finish at the Nahoon Point Nature Reserve parking lot (where Footprints Cafe used to be before they moved to Latimer’s Landing).

The beach at the start is a “there and back” Nahoon beach section, taking one slightly beyond the Nahoon Surf Lifesaver’s Shack to a turn around point. Runners and walkers turn back to where they started from before they get to Nahoon River mouth.

So if about 1.3km at the start of the Nahoon Point parkrun is made up of beach, and the final about 600m is made up of beach again, what is the remaining or middle 3.1km made up of? Bits of tar, dirt road, jeep track, and narrow dirt path make up the course between the beach start and finish. There’s uphill, downhill and nice stretches of flat too. The Nahoon Point parkrun course has it all.

And then we were off!

I didn’t enjoy that the Nahoon Point parkrun started on the Nahoon beach. More than a km of sand had to be covered before one found firmer footing beneath one’s feet. The sand was hard in places, though, and one is just caught up in the crowd and keeps moving along. It’s amazing how much further one can run before feeling like one wants to walk, if one is in a crowd. I managed 10 minutes of running before I walked for the first time. Had I been alone, or had it been just Tony and I, I’d very likely have been walking within 4 minutes – yeah, sad, but that’s just how unfit I currently am. It was clear that Tony and I were holding my son up, and I suggested several times that he go ahead, but my son was adamant he wanted to stick with our agreement that we all stick together for our first one.

We finished our first Nahoon Point parkrun in just over 45 minutes. We were each given a little barcoded tag at the finish line. A few steps further and we handed this in, and at the same time also had our permanent personal parkrun barcodes scanned. We didn’t have to remove our paper parkrun barcode from our little see-through plastic packets as the scanning worked right through the plastic – we do, however, want to get our little paper parkrun barcodes laminated sometime.

After the Nahoon Point parkrun

Having already decided that it was only our first Nahoon Point parkrun that we’d run together, my son announced that he was eager for a week to go by so that he could greatly improve his time the next time. I looked forward to seeing by how how much he would. I also believed I could have gone a little faster than I had, and I too looked forward to doing it again the next Saturday. Tony also wanted to work on improving his time the next time we did the run.

Once we were home we checked online for the results of that morning’s Nahoon Point parkrun. The Nahoon Point parkrun latest results weren’t there until late in the afternoon. The results for the Sunrise on Sea parkrun were in early though, and I was pleased to see that my older son had done his 39th Sunrise on Sea parkrun in a personal best time of just under 21 minutes.

Both Tony and I were somewhat stiff after the run, and even more so the next day. but we were still keen to do another Nahoon Point parkrun. And we did, this morning, a week after our first one.

My eldest son spent the night with me last night instead of with his father as he’d needed me to take him to movies with friends. My boys’ father would only be collecting them for the night after doing his Sunrise on Sea parkrun, so both my sons came with Tony and I to do the Nahoon Point parkrun this morning.

Although pleased that I went under 40 minutes (38mins20secs), which was my goal for this morning’s Nahoon Point parkrun 5km run, I felt awful during the run, and even more so directly after the run. Instant headache in the area of my right temple, weak, out of breath, and very nauseous. Once home I took two paracatemol, had a shower, and went to bed for two hours. I felt somewhat better after that, and also felt determined not to push myself too much next time. I definitely want to work at getting my Nahoon Point parkrun times down to considerably better times, but I know I need to be careful at how quickly I try to do that. I’m not the 20min 5km 17 to 25 year old I was over 20 years ago.

Tony, although improving his time by between 2 and 3 minutes, also took the finish quite badly. He looked awful as he finished the run, and seemed a little disorientated. His chest was tight and he was light-headed. He seemed to recover before I did, though. Still, I hope he also doesn’t push too hard next time. We can work at s–l–o–w–l–y improving our times in the future.

It’s challenging and fun at the same time, doing the Nahoon Point parkrun. If you haven’t yet done it, get yourself registered, and then to the start at Nahoon beach every Saturday morning, with your barcode. It’s free and you can check your times online afterwards. If you’re not in East London, there is very likely a parkrun event near to where you live. The parkrun starts at 8am. Don’t be late!