What a day to do a Nahoon Point 5km parkrun. It’s raining in East London today, 4 April 2015, it’s Easter weekend, we were both a little chesty when we woke up this morning, we had to push the car to start, we were worried about running out of petrol as had no time to stop at a garage along the way, and we arrived with just 2 minutes to spare before the 5km parkrun started. 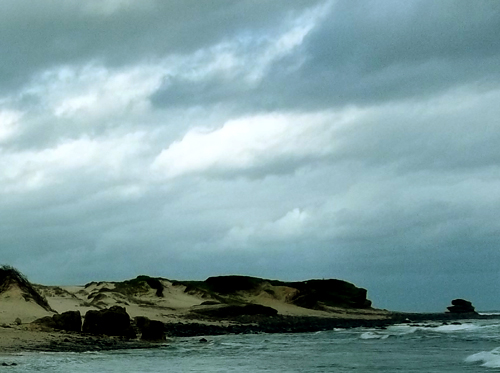 Nahoon Point 5km parkrun – with more than 4km behind one, one comes around that point in the distance beneath the cliff, then across the sand, turn right, across more sand, and then one is finished!

But, hey, another 5km parkrun under our belt! 4 Nahoon Point parkrun runs now. And we’re glad we made the effort to get out of bed when we did, and to head down to Nahoon beach for the start of the run.

There were less than 300 5km parkrun runners and/or walkers there this morning. This is less than half of the field on the 14th of March and 21st of March (our first two of four 5km parkrun runs so far). But even so, we were impressed – it was drizzling and it was Easter weekend!

I was really hoping to get another PB:

It was 8am about 2 minutes after we got to the start, and we were off! The 5km parkrun route lay ahead.

I thought the drizzle would be cooling and energizing, but I felt really sluggish. Getting my shoes even more wet crossing the little stream just before the Nahoon Lifesaver’s Shack made me feel even more sluggish.

It seemed so far to the other side of Nahoon beach to the turn around point. I’m not supposed to take my first walking steps until I get back to the car park, and I’ve pretty much managed that during my previous 3 runs – well, the first time I did, and then the next two times I took my first walking steps just before the car park, but it was only about 6 or 7 steps up the tiny little hill just before one gets onto that lovely tarred parking lot.

This morning, however, I just couldn’t quite make it at a jog to even that same spot, and I walked about 30 steps before getting onto the parking lot tar.

So maybe because I’d gone a little slow during the first 1km of this 5km parkrun today, I’d feel better further along, and would be able to pick up the pace a bit like I had the last time.

I still didn’t feel good until about the half way mark, but then felt quite good after that, and thought I’d really picked up the pace. It was also the first time I made the entire little sand path back to the tar without walking. This was looking good! Maybe I’d get a new PB!

I even felt a bit better than usual around the front of the cliffs and on the sand as I neared the finish, but …

no new PB. My time this morning was 37.18. This was 33 seconds slower than last time. At least it’s my second best time of the four 5km parkrun runs I’ve done so far, but, still, I was pretty disappointed. On which part of the 5km parkrun could I work harder next time? It didn’t quite make sense – I really thought I’d done better than last time over the 2nd half of the course – and similar to last time in the first half of the course.

I think my problem is with the first half of the Nahoon Point 5km parkrun, but I’m not sure what to do about it. If I push too much there, I get tired too quickly and can’t cope well with the rest of the course. If I hold back and take it easy during the first half, I do have more energy for the last half, and push a little harder during it, but this is obviously not good enough.

Although I’m far from doing 20 minute 5km runs like I could do when I was in my 20’s, and don’t hope to do those sort of times again, I still think I’m going to feel pretty proud of myself when I do reach my Nahoon Point 5km parkrun time goal – 29.50 to 29.59 (under 30 minutes, basically). I am determined to get there.