WELCOME TO OUR SITE, TanT - That's us - Terry and Tony! See our EXTRA INCOME IDEAS LIST and our SERVICES AND PRODUCTS
If you live in South Africa and need SMALL DRIFTWOOD PIECES for your driftwood decor projects or craft projects, then visit our driftwoodforsale.co.za site.
For BEACH HOUSE WALL DECOR in South Africa, see our beachy.co.za site.
TANT
Beachy, Blog, East London, Photography

We went to Crawfords Beach Lodge. Terry won a prize in a photography competition – a few actually, but we’d already used most of them. Well, the other two. The biggie was a two night stay, bed and breakfast at Crawfords Beach Lodge in Cintsa East, just a little way north along the coast from East London.

If you haven’t yet been to Crawfords, go have a look at the Crawfords website. Browse around the site, and you’ll wonder just what is it all about? What makes Crawfords worth the effort of visiting? Why do people bother going back to Crawfords? Often!

I’ll tell you what it is – it’s Crawfords itself.

There is no way a website can capture atmosphere and ambience.

After accessing Crawfords Beach Lodge through the security gate one is immediately transported to another dimension, that doesn’t really exist. Not in South Africa anyway. Crawfords made me think of the many lovely little villages one would encounter off the beaten track in England. Narrow winding little roads, with the buildings as close to the road as possible, and an absolute abundance of flowers, bushes and trees. 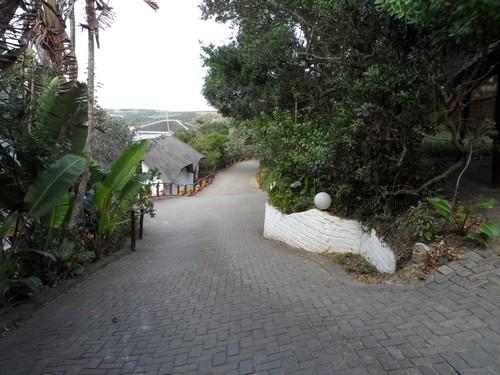 Okay, there were monkeys, but I must assume they were transported through the Crawfords Portal by an unsuspecting visitor, but there too, they were particularly fascinating to watch, so having them around is not (really) a problem.

Bed and Breakfast accommodation meant that we would have to either have supper at the Crawfords Restaurant, go into the village to the Barefoot Cafe for a meal, or fend for ourselves. We adopted the latter option, as it would free us from any time constraints, meaning we could eat when we wanted to.

Our first afternoon at Crawfords Beach Lodge we walked down to the beach. To check the route, and to find a suitable spot for our planned photo shoot the following morning. On our way down we wandered around Crawfords village. And we found a trampoline. Terry trampolined. I took photos. We finished our beach reconnaissance mission. We walked back up to Crawfords. There is one hell of a lot of steps going back up. 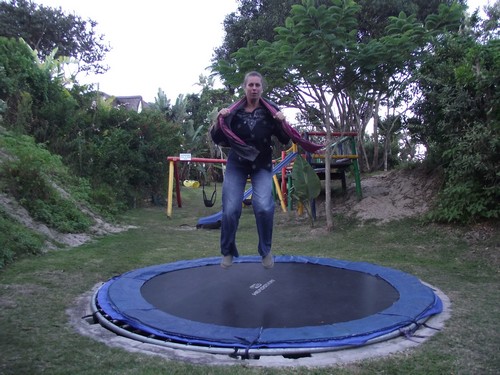 Back at the Village Command Post aka The Pub, we stopped off for some light refreshment to help us recover from the arduous task from which we had just returned. Refreshments were consumed, and we went BACK down to the beach. 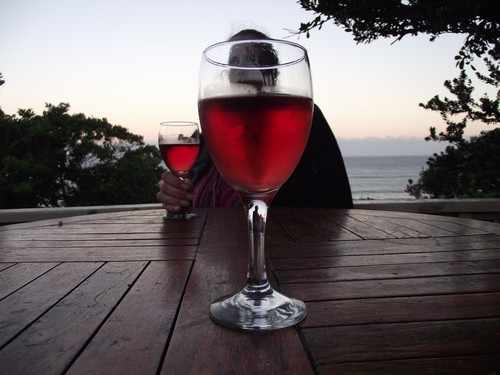 This time to see how far the lighting went, and to check that we would be able to find our way down in the dark in the morning. 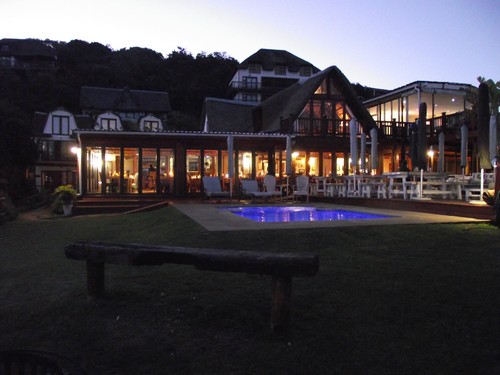 Then back UP all those steps. By the time we got to the top I was ready for further refreshments and solid sustenance. This occurred. We sat out on the deck making a noise for a while, before adjourning for the evening, having consumed our allocated provender for the meal. Getting to bed before midnight was a rare treat.
Getting out of bed, to walk down those steps to get to the beach, was also welcome. We’re usually up before the sun, but we never get to watch it making its way into our world.

That morning we did – and a rare treat it was, as it was also Terry’s birthday. There was something magical about the whole scenario. Birthday, new day, sun rising, clear day.

A New Day Dawns For Terry and Crawfords Beach Lodge 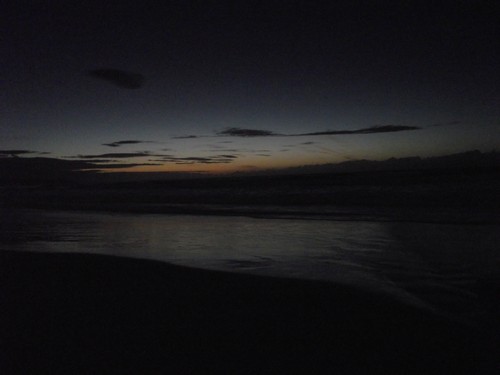 We got to the beach in the pitch dark. There was just a very faint hint on the horizon that something big was due to happen. And happen it did! Terry did cartwheels on the beach, and I got photos of her doing them! 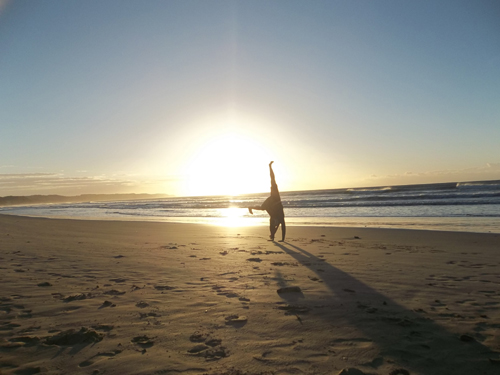 After breakfast we went for a walk along the beach – after Terry conned me into believing I too wanted to trampoline. She kept me there for several hours – bouncing up and down. I got off the trampoline about 3 seconds before total collapse.

We didn’t walk far. But we did take loads of photos. 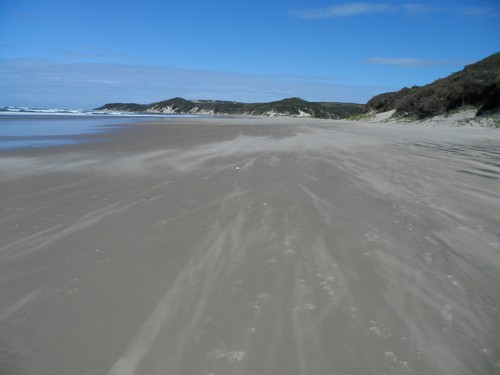 We walked back again. 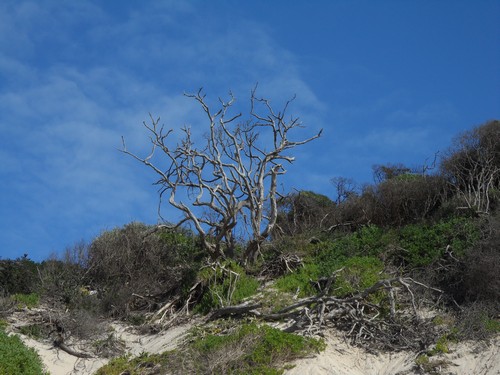 Crawfords Beach Lodge – At the end of the Beach Walk

And back up those steps. Those many many steps. We walked up them. Again.

Topside, we spent the rest of the day goofing off. We watched monkeys playing on the buildings and in the trees. We took photos of aforementioned monkeys. I napped, Terry watched tv. I snored. Terry watched more tv. 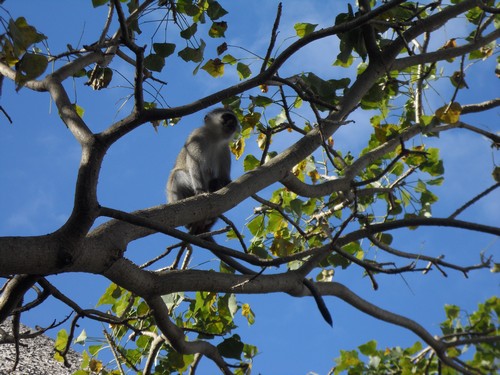 Crawfords Beach Lodge – There is a monkey in there

Towards evening we made our way back to Village Command, and partook in a libation each, before another stroll – a short one along the beach. And then the steps again. Back to our room, where we partook of our victuals out on the deck, at leisure.

Because we had a somewhat hectic schedule the following day we went to bed earlier than we would have, and got out of bed earlier than we wanted. After breakfast we took our leave of Crawfords, through the invisible portal just inside the gate, and found ourselves back in South Africa.

it may have been only two nights and one day, but it was really awesome to be able to be that separated from reality. What really made it good is that we weren’t able to connect to the Wi-Fi, and the mobile reception at Crawfords was really sad.

Thanks to Terry for taking a really cool shot of her boys and a long-time friend, and then entering that photo into the competition. And thanks also to Crawfords, for generously sponsoring the getaway, and helping encourage photography – a means of preserving our lives and our heritage for years to come.