WELCOME TO OUR SITE, TanT - That's us - Terry and Tony! See our EXTRA INCOME IDEAS LIST and our SERVICES AND PRODUCTS
If you live in South Africa and need SMALL DRIFTWOOD PIECES for your driftwood decor projects or craft projects, then visit our driftwoodforsale.co.za site.
For BEACH HOUSE WALL DECOR in South Africa, see our beachy.co.za site.
TANT
Blog, Journal, Life, South African 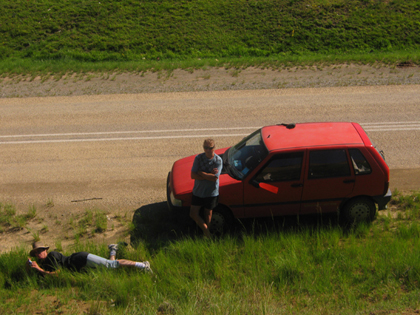 On the way to Hogsback, stop and take photos.

Shortly before Alice, turn right. And then look out for Hogsback, 30 km further. Easy enough.

Hogsback is the small village exception.

The road leading into Hogsback winds its way upward, with a lush overgrown cliff-face on the left, and a fast receding rest of South Africa waaaaay down there, on the right. 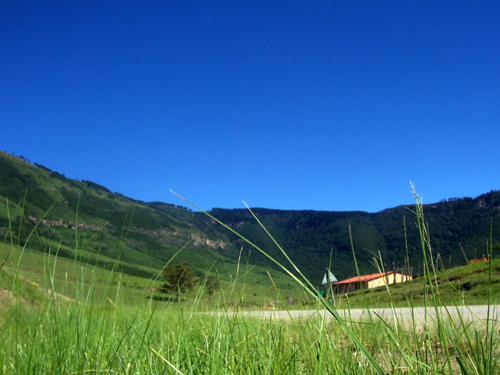 getting close to Hogsback

There is no sign that says “WELCOME TO HOGSBACK”. There are no dusty-gardened homes on the village outskirts. There is no traffic cop waiting under a tree just before you get into the village.

You’re halfway through the village of Hogsback before you realize you’ve arrived!

Our day trip arrival in Hogsback went largely unnoticed by the locals, except for the chap selling rural artifacts at the entrance to the Forestry area at Oak Avenue. We didn’t buy anything right away, as we wanted to get into our first walk as soon as possible. 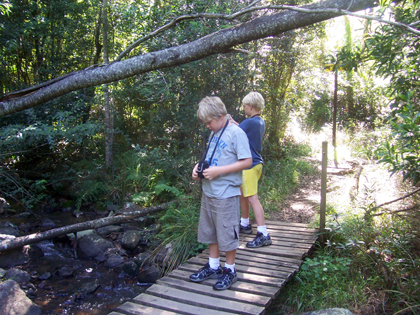 After a slight navigational hiccup, we ended up at the start of the Hogsback walk leading to the foot of the Kettlespout Falls, and not leading to the top of the falls as planned. Leaving the car in the charming dinky sized parking area, Terry and the boys took some photographs at the nearby stream before they all set off on the trail. Within metres it was easy to see just why Tolkien used Hogsback as his inspiration for the Hobbit chronicles. Even the most hardened sceptic would not have been surprised to find a fairy fluttering just above the undergrowth, or an elf perched jauntily on a rock next to the walking trail.

Terry and the boys managed the walk comfortably. Tony struggled. Middle-age, pot-belly and skinny legs are not a good basis for a sedentary website designer to use for Hogsback forest walks.

However, all is well that ends well. Even though Terry, Tony and the boys did not get to the end of the walk, once again due to mis-navigation, all concerned did enjoy the walk. Even the old guy. They decided to call off that particular meander, and continue to the actual intended walk, being the walk to the top of kettlespout. The road was found. The parking area was found. The walk was found. A relatively easy walk to Kettlespout with only one spot that daunted Tony, who is a tad afraid of heights. 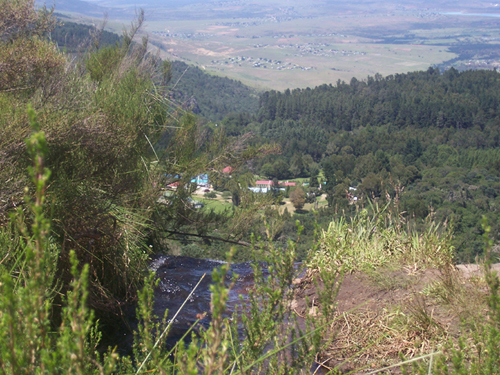 The actual viewing point was another matter for Tony. It is natural to be wary of robust and lively boys anywhere there is even the faintest possibility they could fall. From Kettlespout its a long fall. While Terry hounded and herded the boys, Tony cowered on the bench. The actual river that gushes off the lip of the cliff is in fact nothing more than a little stream, easily crossed without getting your shoes wet. 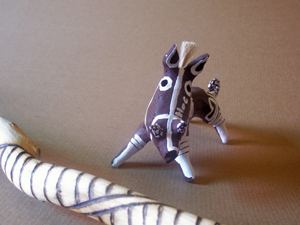 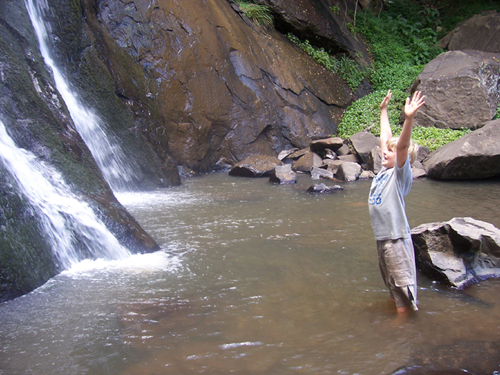 celebrating life and water at Madonna and Child Waterfall in Hogsback 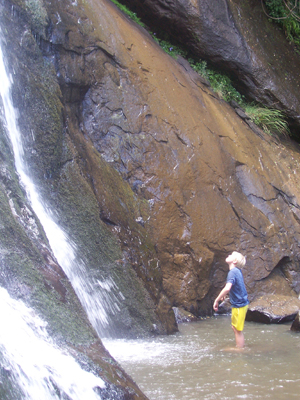 looking up Madonna and Child Falls

Once again the magic of the area was bared. Until one can actually see the falls, tumbling off the cliff face, one does not realize they are there. The area below the falls is rocky, and not large. To get to any really close viewpoint one needs to believe in the Darwin Theory of evolution, and apply it. This however does not detract from the absolute and sheer beauty of the Madonna and Child Waterfall.

It would have been the easiest thing in the world to stay down there.

The worst habit mankind has is eating. It’s impossible to get away from it. Especially with two boys. Even more difficult if there is no packed lunch. There was nothing else to do but go back up.

Terry and the boys managed the walk comfortably. Tony struggled. Middle-age, pot-belly and skinny legs are not a good basis for a sedentary website designer to use for Hogsback forest walks.

sleeping child with Hogsback walking stick, during the drive back home from Hogsback

When Terry, Tony and the boys crested the Great Madonna and Child Waterfall Parking Area Summit, the boys decided that they needed Hogsback walking sticks.

Thinking quickly, the entrepreneur averted a national socio-ethnic trade related confrontation. He suggested that he hand two walking sticks over, and that the foursome leave the money for them with the manager of the Hogsback Supermarket. This was an offer Terry and Tony had to accept. The consequences of not accepting would be catastrophical. It was also extremely unusual to encounter this level of trust from a stranger. This man was willing and prepared to part with items he made and sold, as a livelihood, with no immediate payment. Modern culture tells us not to trust anyone, even if you do have a Brittanica sized contract. 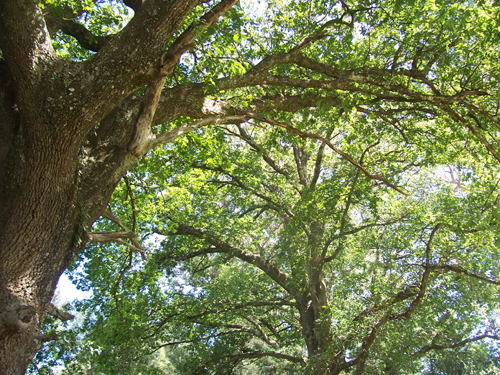 After lunch, Terry, Tony and the boys had intended tackling the Swallowtail Falls. Intended. Post-lunch lethargy hit. Hard. It was decided that Swallowtail Falls, the Big Tree and Bridal Veil Falls would have to wait for a return trip. 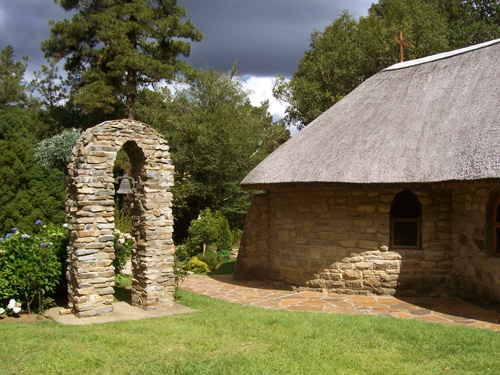 at St Patrick on the Hill in Hogsback 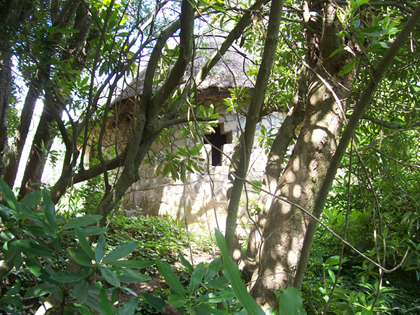 St Patrick on the Hill

To complete the day’s day trip agenda, Terry, Tony and the boys went to visit St Patrick on the Hill.

This delightful little church, set in a garden type landscape, is built from sandstone, with a thatch roof. Terry, Tony and the boys explored as much of the church as they could, taking many photographs.

In any other setting, St Patrick on the hill would have been just another tiny church. In the magical Hogsback village, St Patrick is a cathedral.

Back on the road, it was turn left, stay left, until The Edge.

Terry, Tony and the boys made their way to the edge at The Edge, and the Labyrinth, via the delightful restaurant at The Edge. From The Edge’s edge there is a spectacular view of the cliff face on the opposite side of the valley, and the valley further off to the left. The chalets at The Edge all share this wonderful and awesome view. 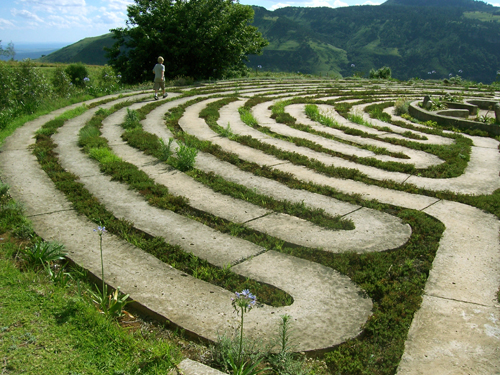 Approximately 50 metres from the fence that separates the edge and falling down a sheer cliff, is the Labyrinth. Terry and Tony sat. The boys walked the Labyrinth.

In closing. This is so cliche, but so true. It was with reluctance that they had to leave Hogsback, and its awesome gigantic presence, intermingled with its underlying magic.

In arriving at a destination such as this, it is unavoidable to take a part of its magic away with you.

The very action of taking from that magic, results in your having to leave a piece of yourself behind.