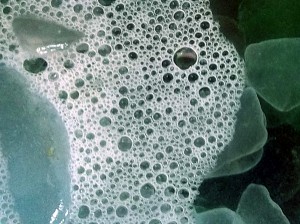 It is also unclear yet (to the many confused and disgruntled Bubblews members who like to share links to their bubblews posts on Facebook) as to whether or not this blocking is a glitch or not, or whether or not it is temporary or permanent.

Bubblews has been experiencing a high amount of spam, and so far seems to be struggling to get it under control. Perhaps that has something to do with the current Facebook blocking of Bubblews, but perhaps not.

How much is currently being blocked?

1)
Bubblers who share their posts to Facebook while they are logged in at Bubblews, simply get an “error” message right at the share button, and if they hover over it to try and see what the url says, they should partly be able to see a message saying the link has been blocked.

2)
Trying to post a link to any page on Bubblews, on one’s Facebook profile / timeline doesn’t work anymore. A message comes up saying Facebook doesn’t think that Bubblews is a safe site to link to, but that if one thinks that’s an error, to report it to Facebook.

4)
Even the Bubblews Facebook page seems to be gone.

Many people enjoying earning extra income for what they write, and for their interaction on Bubblews – without any problems getting paid by Bubblews, even though there are also many people who complain of not receiving their “redemption” payments, saying they haven’t broken any rules, and even though the site seems to be becoming more and more riddled with spam and plagiarized content.

It will be interesting to see how this all pans out. Is Facebook blocking Bubblews? Will Bubblews last long into the future? Only time will tell.

UPDATE 31 AUGUST 2014 The owner of Bubblews has done a post on Bubblews to announce that he too does not know why Facebook has blocked Bubblews, so it appears to be that he did not request that Facebook block Bubblews.

note: at the time of the update above, a “Bubblews Family” group still exists on Facebook, where members of the group, often consisting of members who do not speak English as a first language, offer liking and commenting of Bubblews posts in return for having their own Bubblews posts liked and commented on – but any linking to Bubblews is no longer allowed in this group. Being involved in an exchange group like this is against the rules and TOS of Bubblews.

It is more important than before that Bubblews start a Bubblews membership application approval process. It should be a top priority of the site.

UPDATE EARLY SEPTEMBER 2014
While it is still a little unclear why Facebook blocked Bubblews, the block lasted not much more than a day, before everything reverted back to normal.