WELCOME TO OUR SITE, TanT - That's us - Terry and Tony! See our EXTRA INCOME IDEAS LIST and our SERVICES AND PRODUCTS
If you live in South Africa and need SMALL DRIFTWOOD PIECES for your driftwood decor projects or craft projects, then visit our driftwoodforsale.co.za site.
For BEACH HOUSE WALL DECOR in South Africa, see our beachy.co.za site.
TANT
Blog, Sport

One to go, then we take a rest from the parkrun, to take photos.

The parkrun Saturday was remarkable, for its almost unremarkableness.

It started, it finished.

But it’s what happened before the start that made this particular parkrun remarkable – young Ruth, who is all of 5 years old did her 50th parkrun!

The bits of Nahoon Point parkrun between the start and finish are scattered with a variety of terrains more suited to serious 4-wheel drive vehicles than for mere shogglers, but, to get to the finish it is required that one, irrespective of ones ability or athletic niche, completes all the challenges. 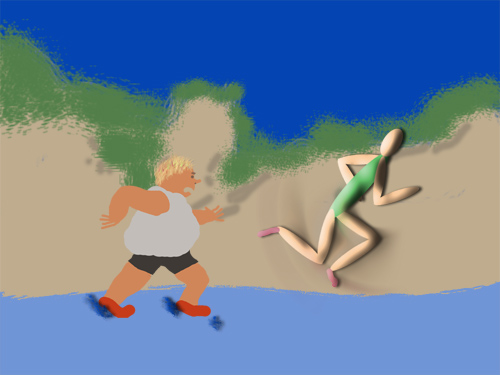 From the flat and fast (by shoggle standards mind you) first section along Nahoon Beach to that tortuous ascent up Toilet Hill. Beyond that is the Jeep Track – I did mention 4-wheel drive vehicles didn’t I. The Jeep Track is mostly okay, except for Retch Stretch – the bit just before it links up with the tar road at the Sewage farm. It’s steep, and for tired legs almost too much. But it does pass. The tar road along the top of the course is in better condition than any other road one is likely to encounter in South Africa. Probably because there is no taxi route along there. Yet.

After turning on the tar, and navigating the drifts of sand that cross the road, one is expected to leave the nice tar road, and navigate a filthy steep hill up to a square building, and then back down again, onto the tar road. I really don’t understand why one has to leave the road, just to go back to it. Unless of course it is to make up distance. I would happily go back to the turnaround point instead, but alas, shogglers are found in the part of the pack that makes the front half possible, and consequently don’t get to make the course decisions.

Fortunately, on regaining the tar road, the worst is over.

Down the tar road, bear right back onto the Jeep track, and not too far down the track, bear right again, onto Sand Path. For shogglers it is Extreme Bad News to get caught behind walkers here, as it is difficult to pass anyone. All the lovely kinetic momentum gained on the downhill is lost when slowing down to a walk, and is almost impossible to regain until a new downward slope is found.

Sand Path is not too long, and comes out onto a tar road that leads down to Mermaids Pool. This piece of road was built with shogglers in mind. Not too much effort goes into ensuring a pace that is relatively speedy, yet just short of uncontrollable. An uncontrolled Shoggle Landing is most undignified, yet rather amusing to behold. A shoggler rolling down a hill uncontrolled is very similar to a shoggler rolling down a hill under control. The differences being in the speed, the language coming from the shoggler, and the number of band-aids required at the undignified end of the descent.

At the end of the road it’s an almost sharp right along the rocky coastline.

A shoggler coming through here at speed needs to use extremely dexterous footwork along the rocks. Or fall. And break.

At this point it is unthinkable that the shoggler should give up – the end is close – close enough to warrant taking just a bit of care while traversing the tricky rocks. There is another reason to not give up at this point. Finishing the parkrun along the course is easier than retracing your steps back up the hill. And a lot less embarrasing…

Between the rocks and the finish is more beach sand stuff. But not the same as the beach sand stuff at the start. This particular beach sand stuff is soft, loose, and designed to make things difficult for fat little folk with tiny feet – they just sink into the sand. I often think this is why top athletes are not fat, or have big feet, or both.

After 4940 meters of mixed feelings one encounters the finishing unstraight. A sharp right around the little dune puts the finish in sight. But it’s only in sight – one still needs to get to it. A lazy left bend leads to the finish. That’s the Good News. Everything else is Not Good News. 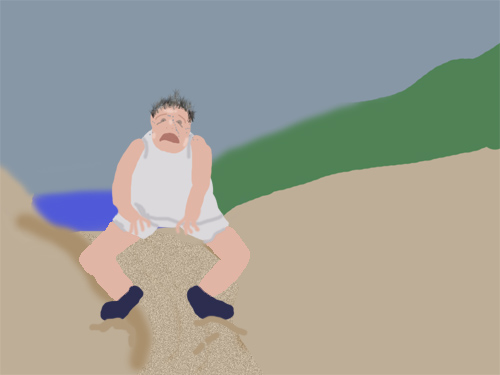 The route covers sand. Lots of sand. Loose sand. Sink in up to your armpits sand. Okay, not quite, almost ankles is close though. And it goes uphill. Just a bit at first, but then it turns into a lot uphill.

And after collecting your token there is still more uphill. On that same loose sand found on the final stretch.

And then – Rah Rah – hand in your token, get scanned, and step off the sand onto the tar parking lot.

And once again, the shoggler has conquered the course.

Oh, a shoggler? One of an elite athletic fraternity that traverses any given course by means of a combined gait comprising shuffling, jogging and wobbling. Extremely challenging it is too…