WELCOME TO OUR SITE, TanT - That's us - Terry and Tony! See our EXTRA INCOME IDEAS LIST and our SERVICES AND PRODUCTS
If you live in South Africa and need SMALL DRIFTWOOD PIECES for your driftwood decor projects or craft projects, then visit our driftwoodforsale.co.za site.
For BEACH HOUSE WALL DECOR in South Africa, see our beachy.co.za site.
TANT
Blog, Food, Journal

The fun delights of the Sanook menu: A fun time at Sanook cafe in Berea in East London was our next choice for an outing using one of my recent East London photography competition prizes – a Sanook meal voucher to the value of R250. We went to eat out at Sanook in Berea on Saturday evening, 28 March 2015. 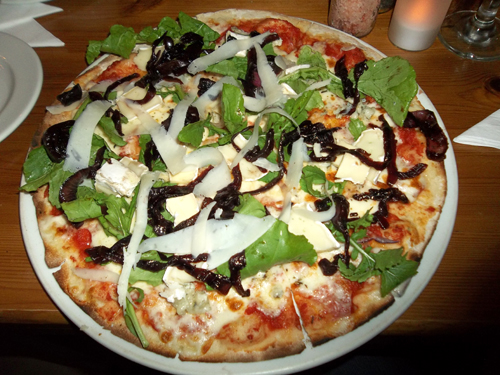 For R308 plus a R42 tip = R350, Tony and I had: a cider each, a garlic bread starter each, a pizza each, and a milkshake each. Not bad at all for just R308 in total! And I have to say lucky for our waiter too – had the total meal price come to R320, we would have likely still only paid R350 at the end of our evening at Sanook. Had the meal come to more than R320 we would have definitely paid a total of more than R350, though – service was excellent. 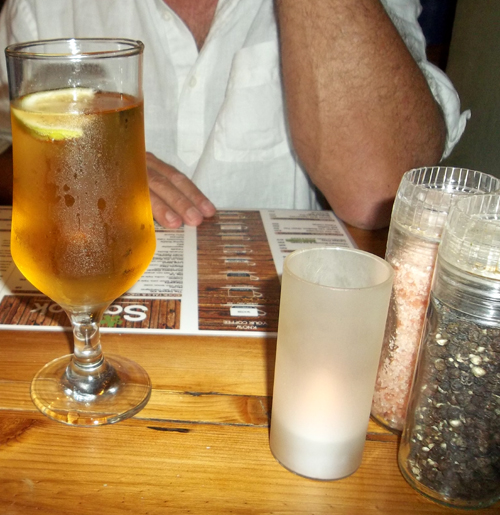 looking at the Sanook menu

We’d already had a look at the Sanook menu online, so knew what we wanted to order without seeing the menu. We still had a quick look through the menu, though. There was so much to choose from! But we stuck with what we’d already decided on.

The Sanook Menu includes so many delightful things that it may be a good idea to have a look at a Sanook menu online before going to Sanook, especially if you’ve never been there before. So many of the Sanook menu items are so tempting – you may take ages deciding what you want. Of course you could always keep going back to Sanook until you’ve tried everything on their menu – and then start all over again, too. People around us were eating so many different things, and it all looked so good. 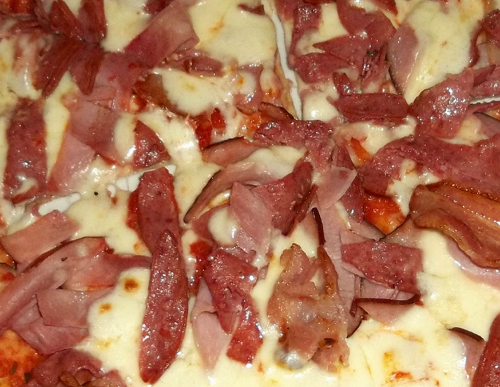 Even though Tony and I both had pizza, and had The Caveman and The Doctor pizzas, the following Sanook menu itmes are just some of the other things on the Sanook menu that looked like they may be something I’d want to order next time we go to Sanook!

In the starters and sides section of the Sanook menu:
garlic, red onion, and mozzarella focaccia
potato wedges
sweet potato skins
crumbed mushroom
beer battered onion rings
Tapas Board – a selection of lovely cheeses like brie, blue and white cheddar cheese, and camembert, as well as ham, salami and olives, served with crusty bread and with or without fig preserve – I’d probably pay the extra and include the fig preserve.

In the salad section of the Sanook menu:
A crazy and fun variety of salads to choose from. I’d like to try The Cross Dresser: biltong, pear, blue cheese, caramelised onion, and sunflower seeds.

In the panini section of the Sanook menu:
the chunky tomato panini – sounds really yummy – basil, olive oil and garlic marinates the tomato, and the panini is served with rocket and mozzarella.

In the burgers section of the Sanook menu:
Wow! Over 15 different burgers to choose from. What would I like to try? I think:
Al-paccino – beef biltong, blue cheese, avocado and caramelised onion.
The Moroccan – a lamb patty rubbed with Moroccan spices, and topped with mint, ailoli and Moroccan sauce.

In the pizza section of the Sanook menu:
We’ve already had The Caveman pizza and the The Doctor pizza (and I had a quarter of Tony’s and he had a quarter of mine) but I’d like to also try some more Sanook pizzas!

From the grill section of the Sanook menu I’d like to try the fillet new age: a 250g fillet topped with oregano and garlic butter and marinated cherry tomatoes

I’d like to see a few more options in the desserts and cakes section of the Sanook menu, especially for those with a sweet tooth like me, but all the same, I’ll choose one of the few options available that I’d like to try: I think it would be the Camper Pizza – a pizza with marscapone, nutella, amarula and banana, and one can choose to add marshmallow at an extra cost, and I probably would!

Right, on to our own meal at Sanook!

Starter:
We each had a lovely cold cider served in a large glass with a slice of lemon, and a garlic bread starter. The pizza we were ordering didn’t have garlic, we didn’t see options on the Sanook menu to request different or extra toppings, and we didn’t really want to ask about it. We usually like garlic on our pizza, but were trying to be adventurous by choosing to have pizza that wouldn’t have any garlic, but we still wanted garlic, so ordered the garlic bread starters. These were lovely – little slices all crisp in the crust and nice and moist and full of garlic in the middle. We’d had no idea at the time that a little side plate would arrive with our pizza, with 3 ramekins on it – one ramekin filled with chillies, one ramekin filled with cheese, and, of course, one ramekin filled with garlic 🙂 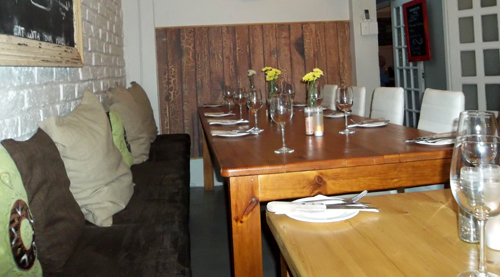 We’d also consider shifting up Sanook pizza in our personal pizza place preference list (currently in third place) if we tried a few more pizzas from Sanook. It’s only Roman’s pizza we are not really keen to try again.

At Sanook, Tony chose The Caveman pizza and I chose The Doctor pizza – one size fits all – there are no options for small, medium or large pizzas. I’d say the Sanook pizza size is somewhere between a very large medium sized pizza and an average sized large pizza.

My four cheese pizza – Sanook’s The Doctor pizza, although really yummy, was not what I’d expected. Being a four cheese pizza I’d expected to get a pizza drowning in and dripping with melted or melting cheese. Once I accepted that different places make their pizzas differently, and that I was still getting my four cheeses, I settled down to enjoy my pizza. The four cheeses were camembert, brie, blue cheese, and pecorino. I loved the generous amount, thickness and size of the little brie slices, in particular. My Sanook pizza had rocket and red onion marmalade too, and the entire mixture provided a taste sensation of note! 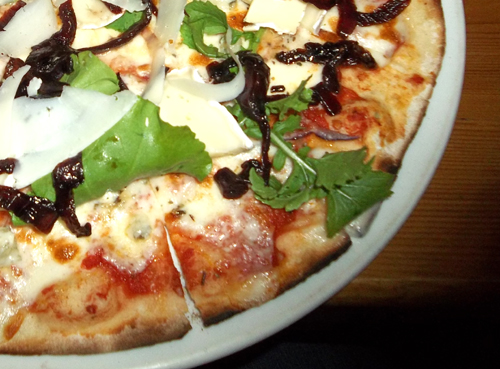 My only problem with my Sanook pizza was that I would have liked the topping to spread right to and even over the edges of the pizza base. I found the edges of my pizza a little dry and boring – but I could leave the edges on my plate – there was more than enough topping on the rest of my Sanook pizza for me to enjoy, and to really fill me up.

I also got to taste some of Tony’s meaty pizza – The Caveman, which had a ham, bacon and salami topping. It looked good and juicy, and it was.

We used only a little garlic from the ramekins on only a little of our pizzas. We were mostly sticking with trying to be adventurous having no garlic on our pizzas for a change!

Our desserts:
We had milkshakes for dessert! I thought our milkshakes took just a tad long to arrive, but not too long. Sanook had really filled up, really quickly, with many patrons eager to enjoy an evening of eating out in Berea in East London. 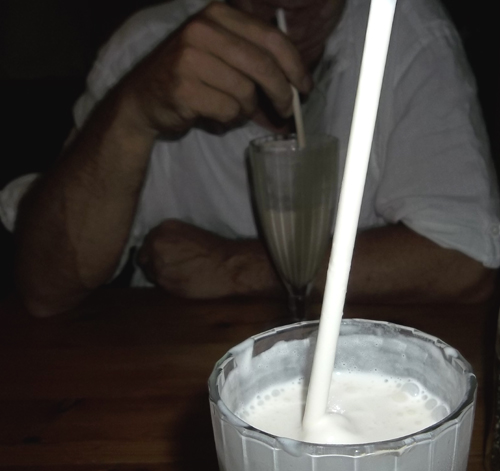 Tony had a coffee flavour milkshake which he said was okay. He says he preferred his coffee milkshake he had last week at Cafe Bella at Hemingways. I had a vanilla milkshake. My milkshake was good, and really thick – perhaps a bit too thick – but it was nothing special. Nice and cold, yes, but I wasn’t getting a “vanilla” taste explosion from it. It was more like a very plain vanilla ice cream that had been softened enough to drink through a straw – with difficulty because it was still so thick. For those who just want something simple and sweet and cold and milky to drink after a meal at Sanook, though, a Sanook milkshake is perfect.

While the Sanook menu delights, and the food is generally excellent, the Sanook vibe is the best. It’s a little cramped in Sanook, but this adds to the cosy atmosphere and to the liveliness of the place. Sanook is a place to be happy and loud. 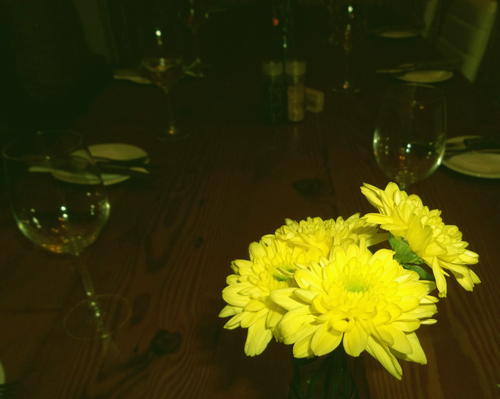 flowers on a table at Sanook restaurant in Berea

Sanook is a magical place to go to escape from reality for a little while. Disappear off the street down a little alley, and you’re already there: in a place where people eat, smile, laugh and chat – merrily.

Eating out in East London? Sanook cafe in Berea in East London is a place to eat good food, have fun and enjoy yourself – and to return to time and time again.