WELCOME TO OUR SITE, TanT - That's us - Terry and Tony! See our EXTRA INCOME IDEAS LIST and our SERVICES AND PRODUCTS
If you live in South Africa and need SMALL DRIFTWOOD PIECES for your driftwood decor projects or craft projects, then visit our driftwoodforsale.co.za site.
For BEACH HOUSE WALL DECOR in South Africa, see our beachy.co.za site.
TANT
Blog, Food, Journal

Doesn’t matter how you spell it, here in East London, it all applies at Sanook Cafe, in Berea East London, South Africa. 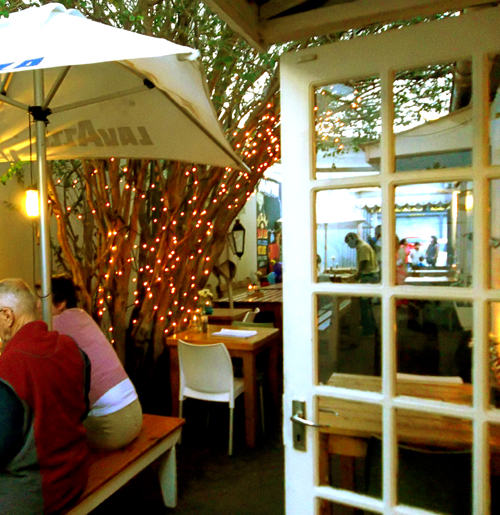 a small part of Sanook restaurant in Berea

The Sanook/Sanuk/fun/Good Times begin when trying to find Sanook. It IS on Chamberlain Road. But it is also kind of stuck away. To get to the most Sanook/Sanuk/fun/Good Times restaurant in East London, you do need to drive slowly, and study the signage. Once you find the Sanook signage, you won’t miss it ever again. There are a few tables out front, which, in my opinion, do not prepare the first-time visitor for what lies ahead.

Through an inconspicuous door, next to an inconspicuous little shop, one is confronted with an alley way. In the alley are several tables, a fairy tree (it has to be a fairy tree ‘cos it is draped in fairy lights), a doorway to the left leading to an interior eating area, and at the end of the alley, another doorway giving access to another smaller eating area within Sanook. 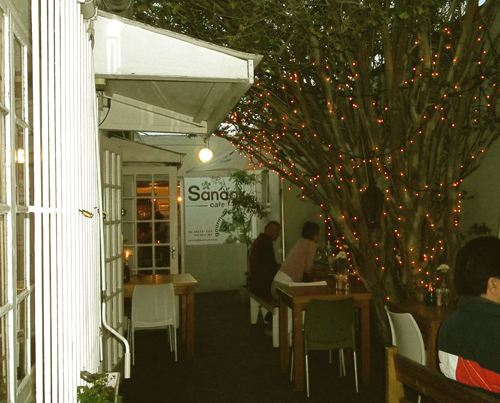 a small part of Sanook cafe in Berea

My first impression was favourable, even though it was pouring with rain. The alley way did have covers to protect diners from the elements, but, these weren’t really effective. That didn’t faze a couple who were dining out in the leaking alley – all they did was move to avoid the dripping!


We made our reservation, and went on our way. Saturday evening arrived, clear and bright, and we were sorry we hadn’t booked a table out in the alley, but, such is the way things happen.

Our table was in the Alley End section. Without even realizing it, we were shown to our table and seated, and our server arrived to introduce himself before he went to fetch the menus.

I loved the atmosphere at Sanook.. The smells from the pizza oven just behind me were awesome, and did a brilliant job of preparing my appetite.

The music was enjoyable, and not too loud to be overpowering. The lighting could have been softer, but the staff were having problems with the dimmer switch. In true South African fashion, the lights worked, or they did not work. But there too, it was not a problem. 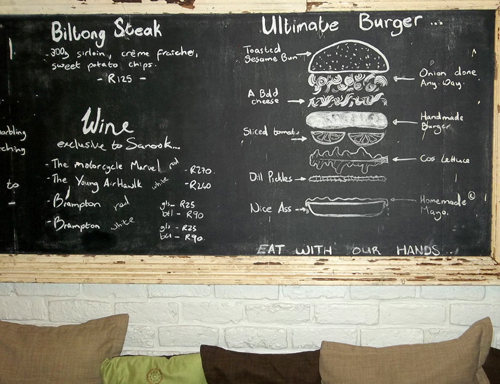 chalk board at Sanook cafe in Berea

The Sanook decor, or, as some miserable souls would say, lack of decor, was right up my alley. A bohemian mix of colours and textures, with “antique” signs, large blackboards with hand written messages, wooden top tables (without table cloths), stock packed up against the walls. Awesome!

For common plonkers like myself, who don’t get out to eat too often, the Sanook menu was a bit concerning, because there was very little on it that I recognized. Fortunately the owners had people like me in mind when they designed the menus, and had descriptions of everything on the menu, along with the individual ingredients. I admit to cheating and checking the menu out online – a highly recommended activity for other plonkers. 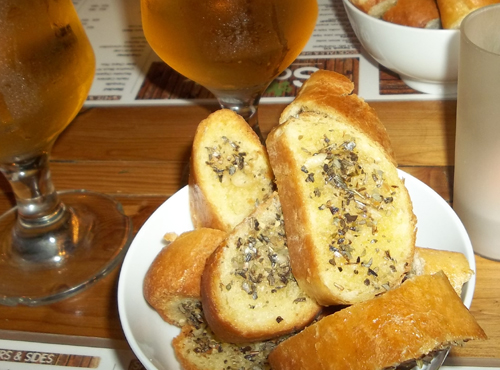 We ordered garlic bread starters. They weren’t on the menu, but the kitchen did a wonderful job of delivering the most excellent garlic bread to us. It really should be on the menu.

We also ordered drinks – two ciders – which were delivered to us cold – really cold, with a twist of lemon – the way a cider should be served. 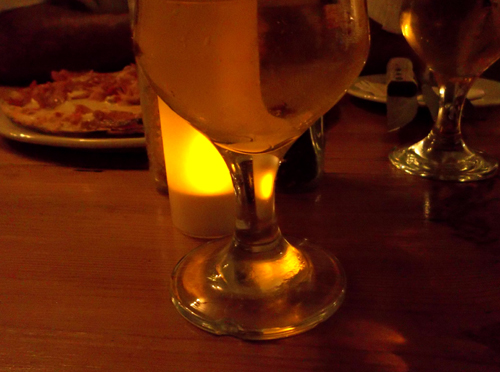 eating at the East London restaurant Sanook in Berea

We didn’t have to deliberate over the menu as we had already done that online.

Terry had the Doctor – a four cheese pizza with fresh rocket, and the yummy Sanook Red Onion Marmalade.

I had the Caveman – a really fine collection of meats over a moist runny cheese topping. I did complain a bit (to Terry) that the menu didn’t offer extra toppings, as I really do enjoy a touch of garlic on pizza. The moaning was unnecessary, as we were presented with ramekins containing extra parmesan, chillies, and garlic. I was a Very Happy Chappy when this arrived! 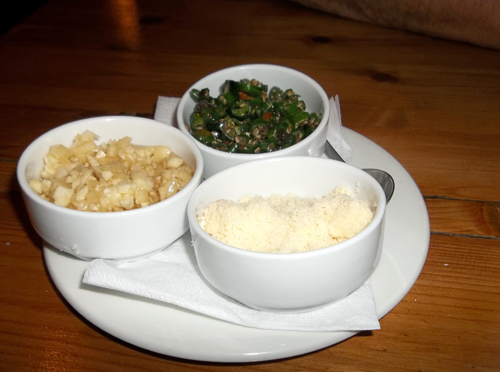 garlic and chilli and cheese at Sanook

I was even happier when the pizza arrived, as the pizza oven smells and bustle had me ready to eat.

The pizza at Sanook is a good, very generous size. The toppings are generous. It became evident to me that the owners of Sanook had put a lot of thought into each and every menu item. I had two slices of Terry’s pizza, and again, I was pleased at the thought that had gone into it. 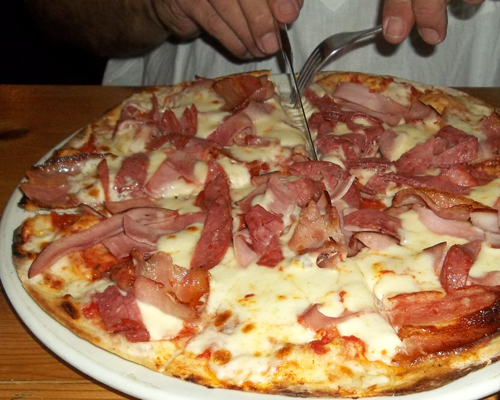 Too often one has pizza which is just a collection of random ingredients spread over a basic pizza base. Not at Sanook. The ingredients complement each other, so much so that I didn’t find it necessary to add the loads of salt I usually do. I also forgot about the garlic! Almost, I did have a slice of my pizza with added garlic, but I really don’t recommend it.

We ended our evening a bit hurriedly. I needed the loo. Our server, Henry, showed me where it was, but someone had just gone in. I went back a while later, but it was occupied. This was my first negative about the evening. There is no way for anyone outside the loo to know if the loo is occupied, and it is a bit embarrassing to keep going back and knocking on the door…

There is one other negative, which is not as serious as the Loo Quandary, but would be a deal breaker for Food Snobs.

Before I go there, I must first tell you that we were at Sanook as guests of the owners. Terry had won a Meal Voucher for Sanook in a photography competition. So, thank you to Jamie and Natasha for a wonderful gift, and thank you Terry for your photographic gift! 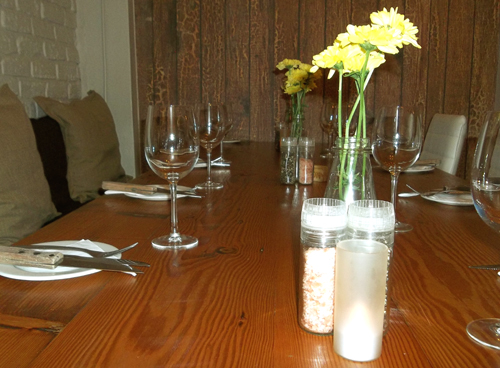 a table setting at Sanook cafe in Berea

Other than those two little gripes, I love Sanook, and I will go back – as often as I can – there is a lot of exploring I need to do on that menu!