WELCOME TO OUR SITE, TanT - That's us - Terry and Tony! See our EXTRA INCOME IDEAS LIST and our SERVICES AND PRODUCTS
If you live in South Africa and need SMALL DRIFTWOOD PIECES for your driftwood decor projects or craft projects, then visit our driftwoodforsale.co.za site.
For BEACH HOUSE WALL DECOR in South Africa, see our beachy.co.za site.
TANT
Blog, Craft Market Flea Market

In short, what sells well at a craft market or flea market is food, firstly, and then things for young kids or babies. 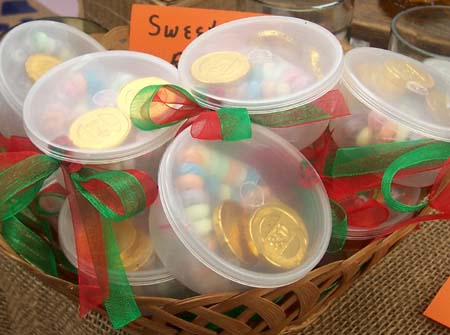 Tony and I don’t really sell food or things for kids at the flea markets and craft markets we go to, and we may look at introducing new items to our existing craft stock items.

The thing with food, though, is that one may need a health licence to sell food at a flea market or craft market, or at least certain types of foods, and we have not looked into that enough yet. Of course one can also consider selling food stuffs other people or places make, for them, for a commission, and they’d be the ones needing the health licence or already having the health licence, instead of you needing it. This would only be for commission though, and you could make more profit if you made the food items yourself.

We have sold little plastic lidded tubs of small bought sweets recently, and although we haven’t sold kazillions of those, they haven’t gone down badly either, especially when there are many kids about at a market we’re selling at, or when there is nobody else selling sweets at the same market.

We don’t make much money on these little plastic lidded tubs of bought sweets, though, and would have to really sell a lot of them, which is not really possible with the small market crowds at the markets in and around East London, so for now we have simply added a few of these new items to our stock – we actually don’t want to add too many due to the plastic tubs we put the sweets in, as our market stand theme is natural and upcycled etc – and mostly glass, so we don’t like plastic things on our tables and stands.

However, with some extra income being important to us, we may look at selling more of other items in the future, that don’t really go with our existing products all that well at all. We feel we need to cater to hungry or peckish people more, and to kids, and to adults with little kids or babies. It’s a difficult decision for us as we like making and selling the things we already make and sell – we may consider two stands at markets in the future, instead of both being at the same one.

Of course if we can introduce foods or things for kids that relate somehow to our existing products, that would be best, as then we can just continue having only one stand at the markets we go to. We could even have totally different items at our usual one stand, but we like things to relate rather than to have a messy assortment of items at our stand – a stand seems to stand out more to shoppers if it has many mostly related items rather than an assortment of many different things.

If you’re thinking of starting to sell at markets because you need the extra income quite badly, rather than just for the social fun aspect of selling at markets, you should really consider selling what people buy the most of – food, and things for kids or babies. Other items that sometimes do well are things for pets, and useful items rather than decor items. Gimmicky type things or a “clever idea” sometimes do well too, but by far it seems that food does best, and things for kids or babies doesn’t do too badly.