WELCOME TO OUR SITE, TanT - That's us - Terry and Tony! See our EXTRA INCOME IDEAS LIST and our SERVICES AND PRODUCTS
If you live in South Africa and need SMALL DRIFTWOOD PIECES for your driftwood decor projects or craft projects, then visit our driftwoodforsale.co.za site.
For BEACH HOUSE WALL DECOR in South Africa, see our beachy.co.za site.
TANT
Blog, Life

Living out in the countryside – albeit just on the outskirts of town – it is inevitable that we be exposed to animals on the farm.

Not just our own collection of 2 dogs and 2 cats, but also the other animals on the farm that own our neighbours, and also the animals that don’t own any people. The local wild fauna. 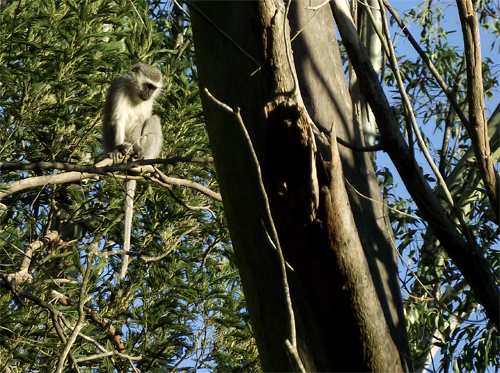 When left alone our animals, Gilly the Jack Russell, Lizzie the Offspring of Unknown Parentage, Schmeegle the cat, and Wart the other cat, are all pretty chilled and laid back.

Unfortunately we cannot control That Effin Black Cat. The one that was sent to this earth to Bug Wart.

Picture this…
A quiet winter’s morning…
Clear sky… No wind… No traffic… The machinery hum from the workshop far off in the distance… birds twittering and chirping and doing what birds do…
Life is good.

And all of a sudden the most awful scrawching grating cat noise starts bouncing around between the houses. And up and down the service alley between the houses. Bouncing off walls and trees and foliage and fences and sides of trucks and between ears….!!!
After the initial shock, and the few moments it takes to regain control of heart rate, breathing and bladder one realizes it’s Wart and That Effin Black Cat…!
So. Off we go. Find and fetch Wart. Bring him home. Relax.

Terry and I know this. It doesn’t bother us.

But it DOES bother Lizzie. Very much. She does NOT approve of our roof being used as a waypoint or a jungle gym by the monkeys. And she really does NOT mind letting the whole world – within earshot – know how she feels.

Nope – none of those options are options. Lizzie is our child. At least, she allows us to think so, but the fact remains she does not like The Grey People in the Air. To her they are an abomination of creation, and should not be allowed near Civilized Folk. We moan, yes. We complain, yes. But we live with it.
Because it IS peaceful in the countryside, and with so many lifestyle advantages, it is worth putting up with the minor foibles of our children, and the other animals on the farm

But only in retrospect.
In retrospect is good – it doesn’t disturb near as much as the actual presence of The Effin Black Cat or The Grey People in the Air.