WELCOME TO OUR SITE, TanT - That's us - Terry and Tony! See our EXTRA INCOME IDEAS LIST and our SERVICES AND PRODUCTS
If you live in South Africa and need SMALL DRIFTWOOD PIECES for your driftwood decor projects or craft projects, then visit our driftwoodforsale.co.za site.
For BEACH HOUSE WALL DECOR in South Africa, see our beachy.co.za site.
TANT
Blog, Journal

Cats are good for people. 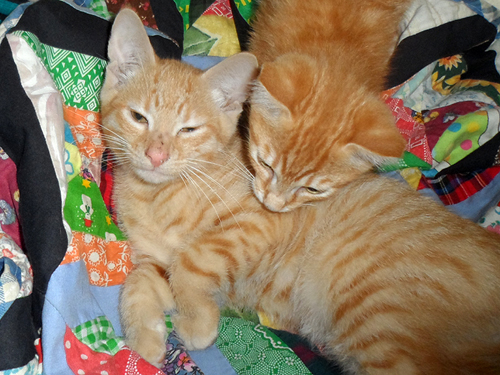 Anyone who knows me will know I am not a great cat fan. Somewhere along the line this important life fact was not passed along to Catkind. Or maybe it was, but the because of the Perverse Nature of Catness they – Catkind – have chosen to ignore this.

We were adopted by two ginger tabby Cats, Schmeegle arrived first, and less than a week later Wart moved in with Schmeegle. We live with cats. There are also two dogs, but the dogs are okay – I really like dogs. They understand me, and they listen to me.

Early this morning I woke up, and couldn’t sleep, so rather than make myself miserable tossing and turning I sat up at the foot end of the bed, and put The First Test of Catness to the test. The Fisrt Test of Catness is: “No Cat shall respond, or go, to any Person using it’s Name”.

And here I was immediately shot down – Wart and Schmeegle both came when called. So there I sat, cross-legged, with 2 cats on my lap – one cat per hand. I stroked and scratched the cats, and they purred. Purring that came from deep within their beings. They were at peace with the world. Another Human had been caught making assumptions about Catkind, and been proven wrong.

I sat there with the cats as they infused their calm contentment into me, and it wasn’t too long before I too started purring. Well, I would have, had I been a cat. Within minutes I was ready to sleep again.

Yep – cats are good for people. As long we realise that we should never make any assumptions regarding their behaviour. They will do what cats do, and as long as we accept that, they will be good for us.