WELCOME TO OUR SITE, TanT - That's us - Terry and Tony! See our EXTRA INCOME IDEAS LIST and our SERVICES AND PRODUCTS
If you live in South Africa and need SMALL DRIFTWOOD PIECES for your driftwood decor projects or craft projects, then visit our driftwoodforsale.co.za site.
For BEACH HOUSE WALL DECOR in South Africa, see our beachy.co.za site.
TANT
Blog, Journal, Life 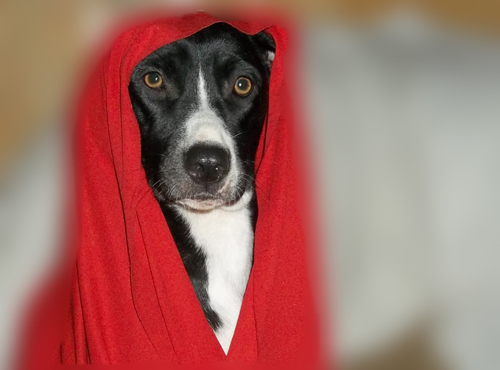 Princess Lizzy in her red dog blanket, getting ready for a nap on a comfy chair in our little home office

It’s not very warm, either, this red dog blanket, but what’s nice about it is that it’s large, it doesn’t get dirty too quickly, and, if the weather is a little cool, Lizzy’s red dog blanket can be folded over double over Lizzy when she goes to sleep for the night, in her indoor homemade cardboard kennel.

The fabric that Lizzy’s dog blanket is made from (whatever it is) also helps the blanket just fall on Lizzy, draping over her nicely, even down her sides. It almost clings to her. So even though her red dog blanket is thin, it does a good job of providing warmth – and a sense of security. I think some real dog blankets should be made from this material. 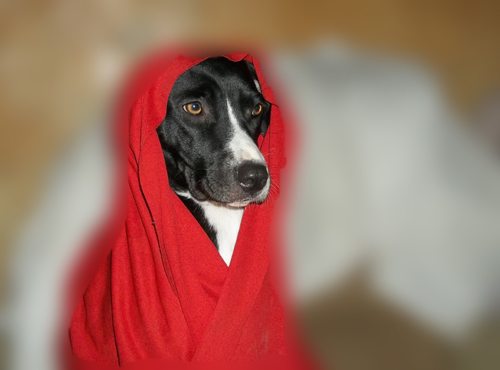 When Lizzy gets tired or overly excited, as much as we love her, she also gets irritating, jumping and darting all over the place at high speed, even biting us (playfully) and trying to climb onto our laps while we’re working at our computers. She’s big and this doesn’t go down well with us – it’s fine if we’re settled in the two comfy chairs in our little home office watching a DVD in the evening when she wants to sit on our laps, but during the day while we’re at our computers on our typist chairs this just doesn’t work out well!

To calm her down we tell her to go sleep on a comfy chair in our little home office. She’ll sit there, and we’ll put her red dog blanket over her, and it seems to calm her. Slowly she’ll start to sag down on the chair, and eventually drop off to sleep.

Lizzy turned a year old in March 2015 (last month). Below are three posts I used to have on a site called Bubblews, written shortly after we got Lizzy in the middle of 2014. Some more photos of her, when she was younger, are included too.

Here She Is – A New Pup for Terry and Tony

“Have you seen the puppies?” somebody or other asked us. I think it was one of our fellow traders at the market.

“Right next to you; just over here.” 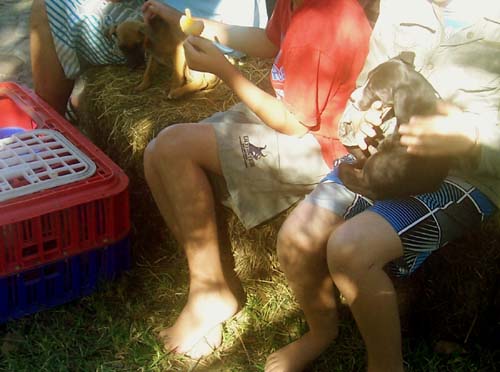 our Lizzy pup on the right, shortly before she became ours, at Yellowwood Forest Campsite in Morgan Bay, in the middle of 2014

Our market stand was next to a shower – well, the back part of a tiny little rustic hut that housed nothing else but a single shower. We were at Yellowwood Forest Campsite, surrounded by nature, and by our fellow traders who were selling their wares during the Footprints Festival in Morgan Bay.

The wall of the hut curved somewhat, as walls of huts tend to do, and from where we were sitting we couldn’t see around the corner (even though there wasn’t a corner; just a curve – a concave curve, I think, if I remember my geography lessons from over 25 years ago correctly).

There were 3 pups. A mostly brown one; a mostly white one, and a mostly black one but with a splattering of white. The splattered one seemed least loved. It seemed to get the least attention from passersby. So it went looking for its own love a little later in the day – just around the curve of a hut from where two people were sitting at their market stand.

Quizzy Lizzy took a few steps towards us, but then stopped. I called her closer making “come-here-doggy” noises, and she came closer. I picked her up. And that was that. 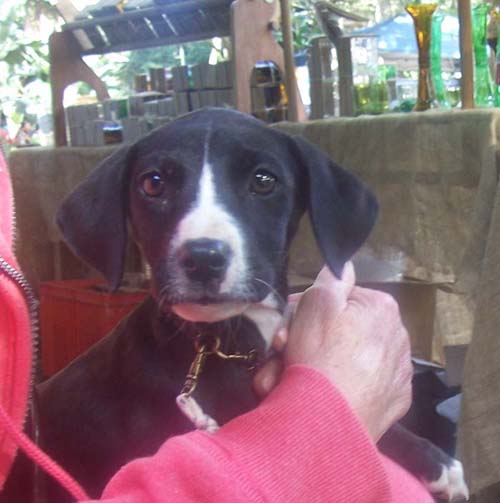 Well, not quite, but before the end of that Saturday she was ours, and we named her Lizzy. She was the last one left. We had to choose her – but I think it was actually Lizzy that chose us.

The Sleeping Arrangements of Our New Pup

Our new pup Lizzy likes to eat and play and mess, but most of all she likes to sleep. We’ve had her for 6 nights, and these have been her sleeping arrangements so far:

Sunday Night
Between Tony and I on our bed at home 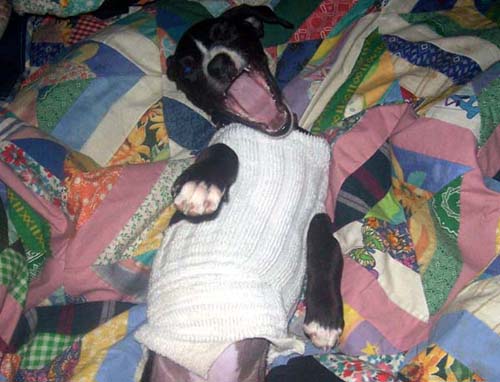 yawning and stretching dog Lizzy when she was still a puppy, wearing an old sock cut to be a dog jacket

Thursday Night
On Thursday night Lizzy slept in her little dome soft kennel with dog blankets in the small indoor area near the loo, between our little home office, garage, loo, and our bedroom – with no access for her to the loo, bedroom or home office. Our other dog Gilly sleeps in our home office.

Lizzy had a little test sleeping in this garage area for three hours earlier on Thursday while Tony and I went and did grocery shopping and bill paying for my folks. My mother reported that she heard 11 week old Lizzy cry for the first hour only.

During the day both dogs and both their soft dome kennels are with us in our little home office – beneath the table our computers are on, by our feet. Last night when we moved Lizzy’s dome kennel to the garage area (to right outside the interior door of the office), I took off one of my warm boots and put it in Lizzy’s dome kennel, to lie on top of her dog blankets. Lizzy followed the boot right in and went to sleep – for the entire night.

I suppose the next step in the separation process is simply to remove the boot, but I think I may add it to the dog blankets in her soft dome kennel for a while yet.

How Our New Pup is Doing Nearly Two Weeks Later

We’ve had our new pup Lizzy for nearly two weeks now. On Saturday Lizzy will be 13 weeks old

Lizzy is doing well – she brings much joy to Tony and myself, and to my parents too. My boys enjoy her too. 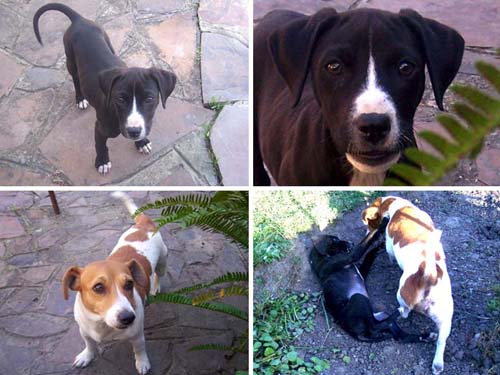 Our other dog is a jack russell. Gilly didn’t really enjoy that we’d come home from Morgan Bay with a new dog, but Gilly has accepted Lizzy now. Although they sometimes still growl at each other a bit, they also play and wrestle nicely. We’re proud of our Gilly – that she has accepted the new pup, Lizzy. Gilly even gets concerned when I call Lizzy and Lizzy doesn’t come, and then Gilly goes looking for Lizzy for me.

Lizzy loves to eat (food) and nibble (our toes).