Absolutely nothing unusual about Nahoon Point parkrun being on a Saturday morning. parkrun internationally is a Saturday Morning thing.

As I sit here writing this I so wish I was one of the Elect Few who have no control over their working hours – being made to slave away at the whim of another. But no. I do control my Saturday morning activities.

We made the decision to limit our Craft Market activities during the year, which automatically gave us many a Saturday morning, free and clear.

Although I had been thinking – not very hard mind you – of doing the odd parkrun, I was content to keep it there, as a thought. Then Terry had this Bright Idea. Let’s Do The parkrun! The Nahoon Point parkrun! 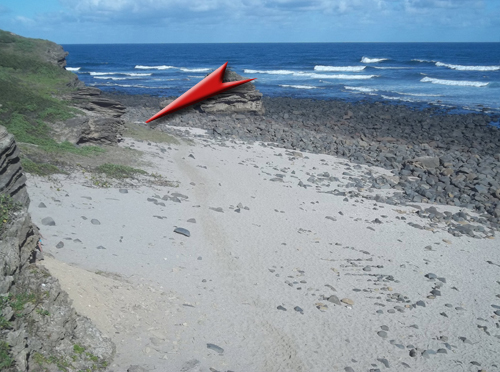 part of Nahoon Point parkrun course, not far from the finish – the arrow points to where following along the line of the bottom of the cliff ends, and the wretched sand begins!

Of course, because I had thought of it, I agreed. Absolute Foolishness, in the first degree.

Before I had the luxury of re-thinking what proved to be a Rash and Foolish Decision, our parkrun registration confirmation e-mails arrived. Bar codes were printed, running socks hauled from the dark recesses where they had been thrown years back, running shoes were found and dusted off, running shirt became a running shirt again, and running shorts were again running shorts.

I studied the Nahoon Point parkrun course on Google Maps, until I knew every metre of the course. It does NOT help to have severe short term memory loss, as 2 minutes away from Google Maps would render me totally incapable of describing the route.

There was no wind blowing.

While we were doing the Noobie Faff – you know, what every Noobie does – stand around and see what everyone else is doing, in order to mimic them – we realized everyone was walking in the wrong direction. Good Heavens – were they all doing a warm-up walk before the parkrun? Surely not.

Most casual runners will do a few stretches, but warm up? Uh uh…

Something not right here.

Terry found the solution to our dilemma.

We went down to the beach. There were loads of people there. And more arriving by the second.

Again we did the Noobie Faff, and found ourselves at the end of a heaving throng of beach-inhabiting folk.

Uncle Bob Norris made a few announcements, and started the race. I didn’t know it had started – Nahoon Point parkrun doesn’t start with a bang – it seems to be more of a whimpering collective desire to amoeborate toward the Nahoon Lifesavers end of the beach.

To describe the two Nahoon Point parkrun runs I’ve done so far would take too long – almost as long as it took to get from the start to the finish, so I’ll skip most of it. What I will tell you is that the first stretch of this parkrun is fast. The beach sand has been hard, though soggy, both times, and was never an issue for me. I have small feet for my weight, and I sink into loose sand. The little stream just before the turn on the beach was a little stream the first time. The second time it was a raging torrent of ice-cold water that required careful footwork and navigation to get through. Okay, some folk did it the easy way, and just ran through it. Okay, the water was, at it’s deepest point – where I crossed – not quite ankle deep to a pre-schooler…

But the water was cold. It was.

On the other side of That Ugly Hill the road goes down, past another car park – past the car park where we park. past the car park that I would so much rather stay at, to look after the cars, and augment my income as a Car guard. But no. No-one has ever accused me of being Smart, or even called me that, so I toddle on, past the car park. Past our car. Past a source of income, however meager, and pursue my intention to inflict physical and mental damage to myself.

The Nahoon Point parkrun course goes up a dirt track next. Not too much up, but enough to be Up. It’s not very wide, and depending on how many people are around, it can be awkward for people to pass. I don’t mind that too much, unless it’s me that is trying to pass someone else. Fortunately that doesn’t happen often, and is enough of a novelty to me that I can be civil about it.

At the top of the dirt track is East London’s very own Retch Road. If there is no wind, the stench from the sewage farm just hangs around, like a viscous invisible miasma that infiltrates into every cell of your body. And if, like me, you breathe through your mouth when attempting to run, it can become very feel-like-I-wanna-vomit-now.

Fortunately it’s not too long, and you’re clear of the Retch Road stretch. The tarred road is actually quite cool. Not flat, but not hilly and not Steep, and not Very Up.

Make a U-turn around the speed-bump marshall and go back along the tar road. Make a sharp right, and sharpish left, and follow the narrow dirt track up to the Square Building With a Fence. This dirt road starts nicely, but then it gets nasty, and gets a Steep Up. About 40 meters from the building is a space on the right where you can comfortably get out of the main stream of sweaty bodies and, if you so desire – or need to – you can gasp for air, retch, cough, or vomit. Choice is yours, the space is there.

As you clear the building, on your way back down the hill, which is now very welcome Steep Down, you do need to be careful that you don’t go too fast, and viciously overtake the people in front of you. I didn’t do it, and I didn’t see it happen, but I imagine that it could. Going down that hill is fast, and space is minimal, even if there is no-one approaching from the opposite direction.

At the bottom of the track put on the brakes sufficiently to allow yourself to do a sharp right without skidding, and head on down the tar road for a while before going back onto the first dirt road. Down there a short way, and hang right into the bush.

For about 400 meters of the 5km parkrun course next up is to follow a sand path through dense bush. You also follow the people in front of you, because there isn’t really space to overtake. Not that I do the overtaking thing often…

At the end of the dirt track you have a choice: give up and turn left to head back to the car. or carry on to the right. I carry on, because the prospects of earning any significant amount of money as a car guard is very remote. The front runners (in other words most of the field) have already finished, and left.

So I carry on. Fast downhill on tar to the Mermaid’s Pool parking lot, and turn right, to follow the coastline below the cliff. Not too bad this area – small feet are really cool for rock jumping.

But, all good things come to an end. And the cliff is a good thing. The cliff makes sure there are rocks. The cliff doesn’t like having too much sand between itself and the sea.

But the cliff ends.

And the sand starts.

And I sincerely detest the stuff. I am quite frank, and bluntly honest when I tell you that there is nothing else in this world that I hate more than That Sand. Except more of it…

And I survived it.

And I will do it again.

I did say I wasn’t too bright didn’t I?