WELCOME TO OUR SITE, TanT - That's us - Terry and Tony! See our EXTRA INCOME IDEAS LIST and our SERVICES AND PRODUCTS
If you live in South Africa and need SMALL DRIFTWOOD PIECES for your driftwood decor projects or craft projects, then visit our driftwoodforsale.co.za site.
For BEACH HOUSE WALL DECOR in South Africa, see our beachy.co.za site.
TANT
Blog, Craft Market Flea Market, Journal 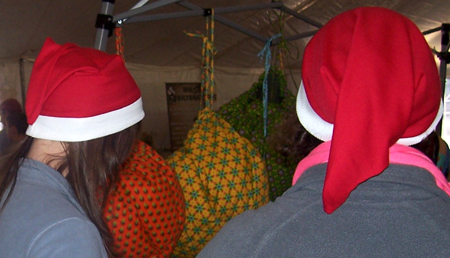 Xmas spirit at Christmas in July in Hogsback

This was to be our first attempt at selling our craft market products at a craft market or event that lasted for more than just one morning. 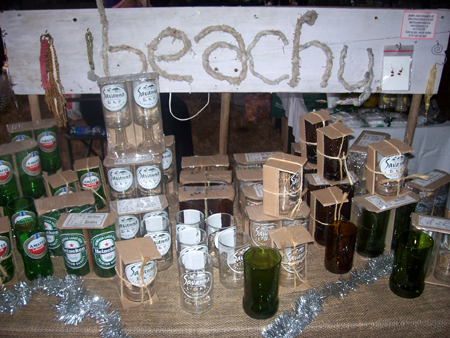 Our previous craft market or selling efforts had so far been at only the following 4 venues: 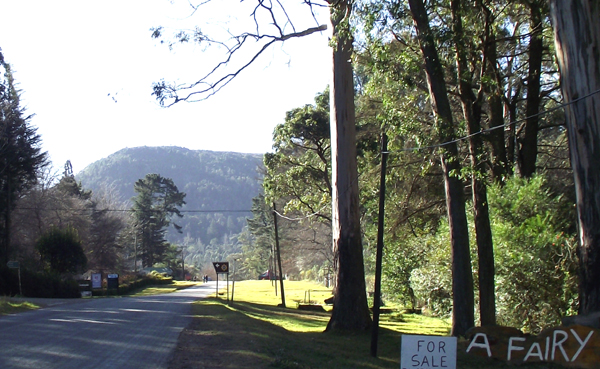 So we headed off towards Hogsback from East London at about 2.20pm on Friday 19 July 2013. After a total of 3 stops for a smoke break, and having patiently sat in heavy rush hour traffic in King Williams Town, and after having travelled at about 80 to 100km an hour for most of the way, we arrived in Hogsback at about 5pm. 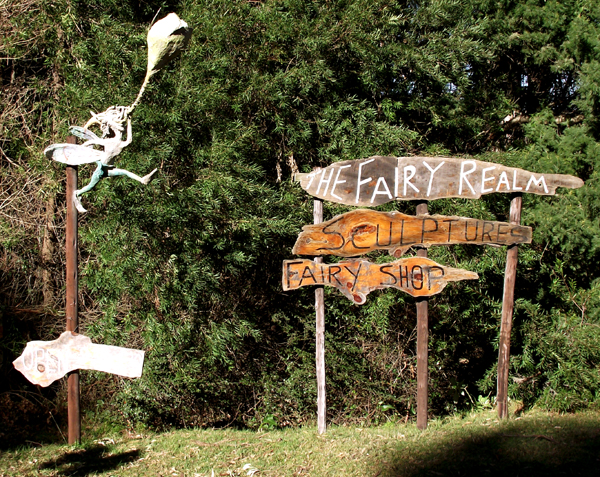 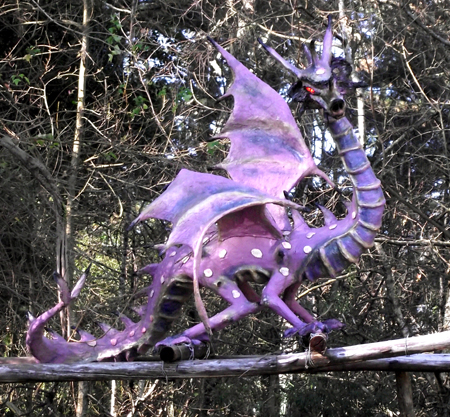 purple dragon thing in Hogsback, visible on your right when driving into Hogsback from Alice side

It was lovely to see the welcoming fairyland sculptures on the right hand side of the road as we entered Hogsback. We’d last been to Hogsback about 5 years previously and had never been to the Christmas in July festival.

Our first stop was Kings Lodge to find the lady who would be giving us our craft market stand number. 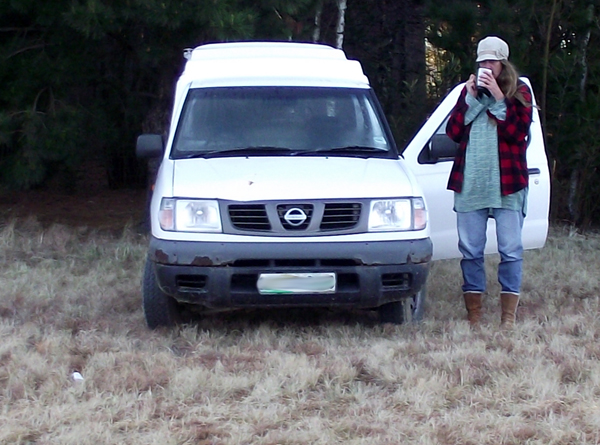 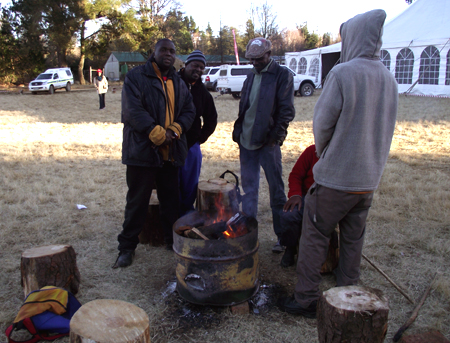 keeping warm at Xmas in July

It was delightful to hear Christmas music playing in the Kings Lodge bar. It was pretty chilly and the air was fresh. There was certainly a magical “Christmas in July” feeling in the air. We were looking forward to sharing our bottle of sherry later. 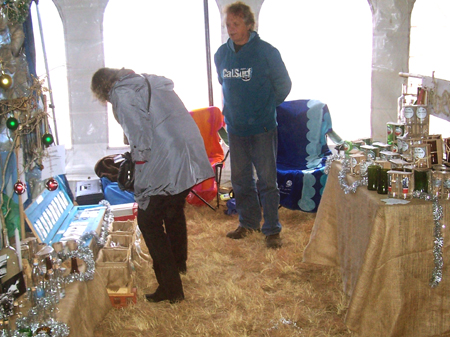 We were without a car due to our car accident in East London 4 days earlier, but luckily a friend was away (without her bakkie) and allowed us the use of her bakkie for a few days. The bakkie had a canopy and a mattress at the back. If we’d gone to Hogsback in the car, we’d have been sleeping in a semi-sitting-up position in the front seats, and if we’d gotten to the Christmas in July 2013 festival tent after dark, and hadn’t been able to take our craft market products inside, we’d have been sleeping in the car in a sitting up position, not a semi-sitting-up position.

Even with the use of the bakkie, if we didn’t get our products inside the tent before dark, we’d have had to leave them in the bakkie until morning, and sleep sitting up in front of the bakkie, so I was getting quite anxious close to 5.30pm about having to wait for the lady who knew our craft market stand number, but we found her at Kings Lodge at about 5.30pm. 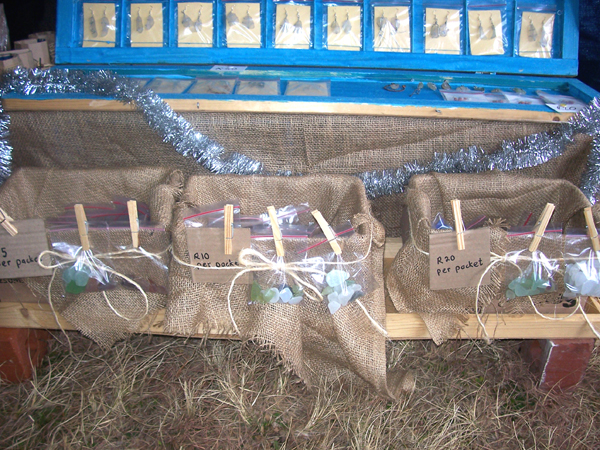 Got our stand number (no.20) and went off towards the Christmas in July festival tent, leaving Kings Lodge and passing Butterfly Bistro along the way. It was getting dark quickly now, but even though anxious, we admired the quaint Christmas lights in the equally quaint main road of Hogsback as we drove along it. 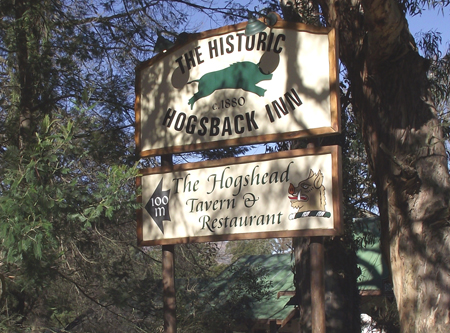 We were a little disappointed to find that the Christmas in July festival tent – where the craft market was being held – was all the way on the other side of the main Hogsback area, away from the inns and lodges, bars and restaurants. It seemed that it should have rather been set up as close to the middle of the Hogsback main road as possible, close to everything else – making it easier for people to get to it. 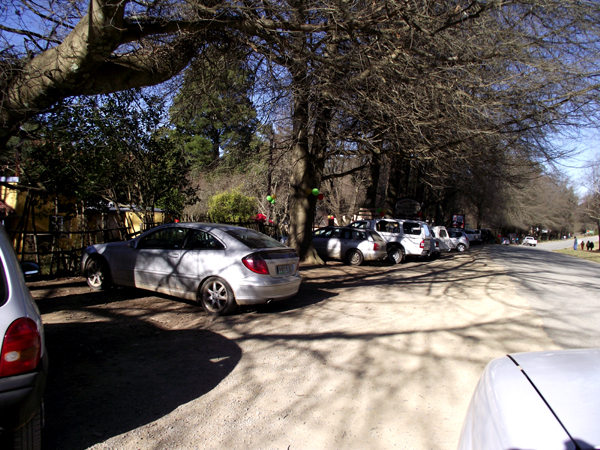 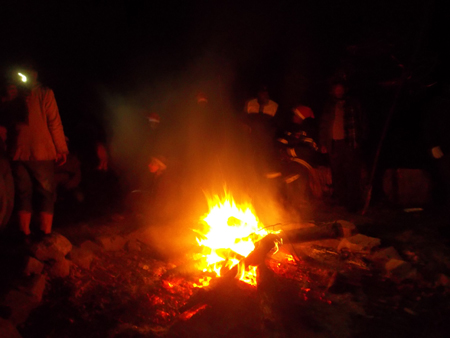 around the bonfire at Butterfly Bistro in Hogsback

We got our things inside the festival tent, saw that it seemed that not many people would be sleeping at the festival tent grounds itself (so we didn’t need to find a special place to park the bakkie) and we went back into “town.”

We’d seen on the Xmas in July program for 2013 that there were going to be fire dancers at Butterfly Bistro and we assumed that there would be a few shows. It hadn’t been dark for all that long when we got to Butterfly Bistro, but when we did get there, we found that that fire dancing show had already taken place. 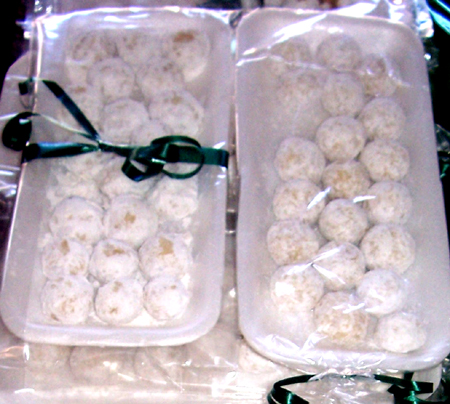 We’d brought our own food, so there didn’t seem to be much else to do in Hogsback on a Friday night, even though it was the Friday night of the Christmas in July 2013 festival, than to have a drink or two – which we did, at Butterfly Bistro. We enjoyed sitting near the bonfire and we got chatting with a guy who it turns out was a year below me at school. He mentioned that there was going to be a trance party the next night and that we should come. We’ve never been to a trance party, and we thought it might be interesting to go and check it out for an hour or so, and we tried to remember the directions he was giving us. 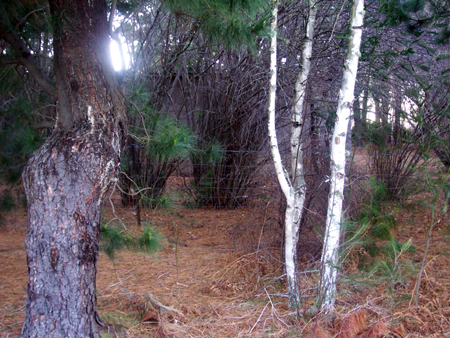 Then “home” – the back of the bakkie parked at the festival tent grounds. It was still early for us, so we dawdled over some coffee and a snack, enjoying the quiet, the dark, and the countryside night sounds while gazing at the stars above us. We also enjoyed witnessing and hearing three horses come klomp klomp klomping by, a little in front of us, near their stables – with the moonlight and their blankets on, they looked like ghost horses in the night. Eventually, but still early for us, we went to sleep in the back of the bakkie. 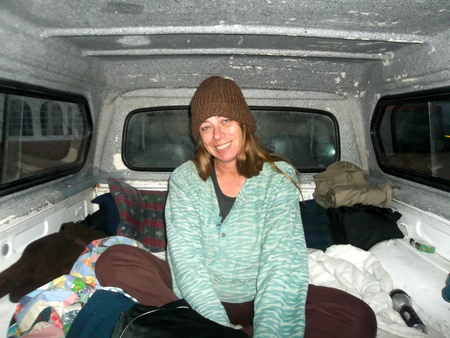 Saturday morning was coffee, and some nice sales of our products at the craft market, but not yet enough to cover our expenses. Enjoyed that my brother and his wife had brought my mom and dad up from East London for the day, to come and visit and to browse at the craft market.

There were some crafters we were already familiar with, and some we were not. There were about 45 craft market stalls in total. We’d hoped there would be more than that, but the smaller turnout suited the quaint and charming surrounds of Hogsback. 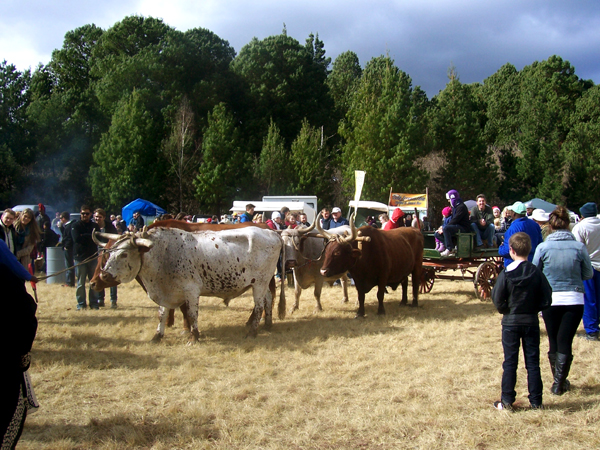 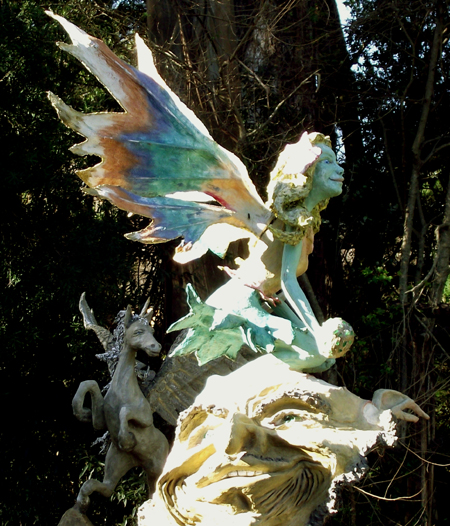 at entrance to the Fairy Realm and Fairy Shop

By Saturday evening we realized we couldn’t remember the directions to the trance party, so popped in at Butterfly Bistro again for one drink, before heading back to the Christmas in July festival tent grounds, even earlier than the night before. We were back at the festival tent grounds by 7pm.

We could hear “trance-party-like” music in the distance and may have gone looking for the source had we not been worried about our petrol. We’d under-estimated how heavy the bakkie was on petrol, and were worried about getting to Alice in the morning to put more petrol in. It was only the next morning that we discovered we could actually put petrol in, right there in Hogsback.

So it was another early night for us on Saturday night. We woke a few times during the night, and could hear the last of the trance party music off in the distance at about 6am. 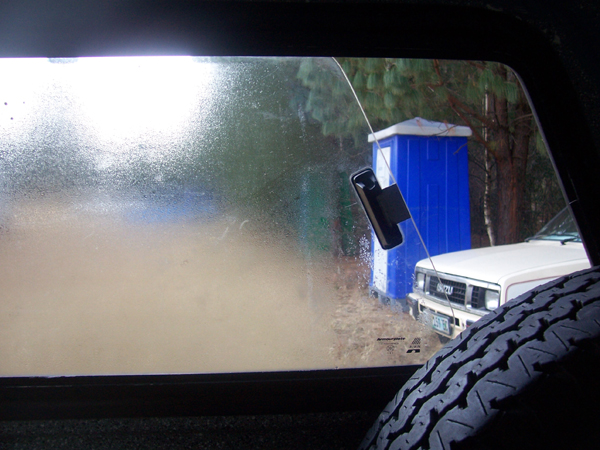 cold morning at Christmas in July 2013

On Sunday morning we got up at about 7am to a temperature of 10 degrees celsius. 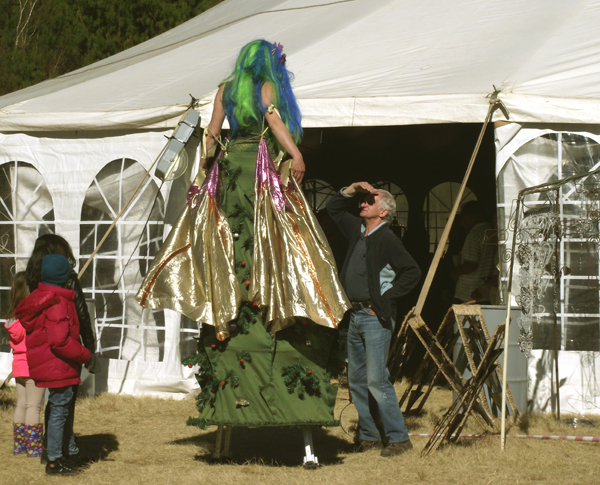 We were glad that we’d stayed both nights though, as we’d had two good nights sleep, which we think we’d needed, we were still there at 1pm on Sunday so got R100 of the cost of the stand back from the organizers, as well as a Xmas in July 2013 Hogsback bag, and got to see the Christmas Fairy. 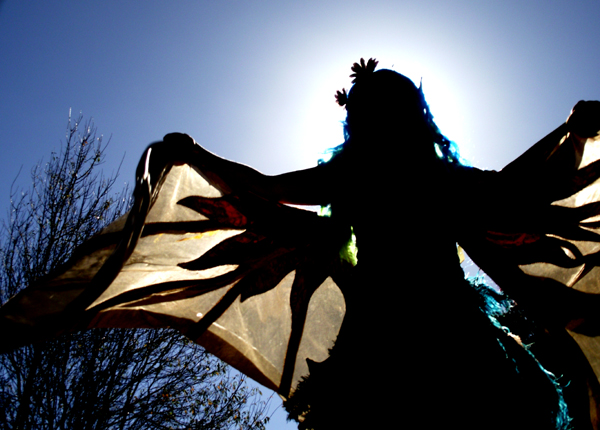 Another reason we were glad that we’d gone to the festival is that we enjoy taking photos so snapped up and relished the opportunity to create a new folder on our computers to add our Christmas in July in Hogsback 2013 photos to. 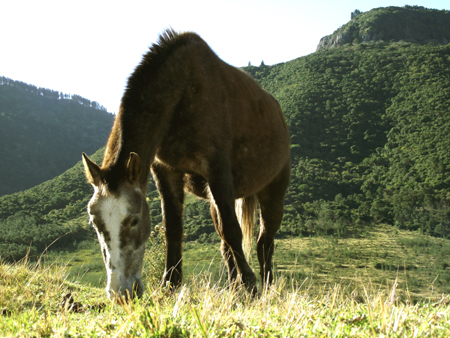 We’d only just-just covered our costs, but had no regrets as, besides the two good nights’ sleep we’d had, we also:

and the Eastern Cape Arts and Culture department spoke to Tony about possibly giving bottle craft workshops in the future sometime.

We enjoyed the drive back home to East London. 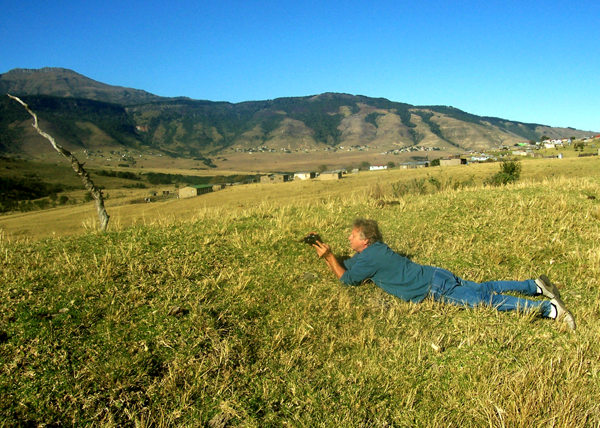 Not quite done with taking photos for the weekend, we stopped not too far outside of Hogsback to take some photos of the beautiful countryside surroundings, before settling down in the bakkie to concentrate on getting back home to East London.

Generally, it was a good weekend away, and we’ll likely be back at the Xmas in July festival in Hogsback next year.